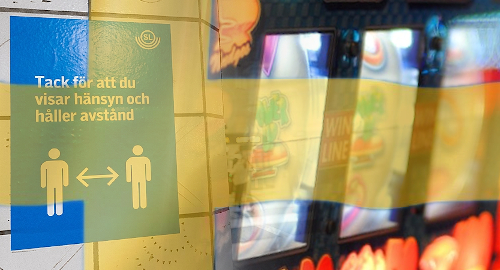 Sweden doesn’t appear interested in revising its pandemic online casino strategy even as COVID-19 forces the government to revise its land-based gambling strategy.

On Monday, Sweden’s Spelinspektionen gambling regulatory body announced that restaurant casinos and other alcoholic watering holes featuring slot machines will need to halt gambling activity after 10pm each night. The new rules, which took effect Friday (20), are currently slated to extend through the end of February 2021.

The change comes as the government ordered a halt in the sale of alcohol between 10pm and 11am each day in a bid to blunt the sharp rise in new COVID-19 infections over the past month or so. Along with the alcohol curbs, the number of Swedes allowed to gather in public has shrunk from groups of 50 to just eight.

Sweden formerly bucked the global pattern of strict lockdowns, relying instead on optional recommendations that initially seemed to be achieving the elusive ‘herd immunity.’ But the country’s number of cases is nearing 210k while deaths have jumped to over 6,400, leading Prime Minister Stevan Löfven to issue blunt instructions on Sunday to cancel or postpone “all the things you would like to do but that are not necessary.”

Meanwhile, the government appears intent on following through with its proposal to extend the ‘temporary’ online casino deposit and bonus limits through June 30, 2021, well beyond their original end date of the end of this year. The Ministry of Finance invited stakeholders to submit their views of the proposal by Monday (23).

The Branschföreningen för Onlinespel (BOS) online gambling trade group had previously expressed its disdain for the government’s proposed extension, noting that there was “nothing as permanent as a political promise of something temporary.” The BOS released its full response to the Ministry on Monday, which largely echoes its dismissive response to the Ministry’s original ‘temporary’ proposal this spring.

The BOS notes that the Ministry’s stated justification for the extension of the online casino limits – arresting an alleged surge in online casino play by pandemic shut-ins – is addressing a problem that “still has not occurred,” unlike the undeniable double-digit surge in betting on horseraces with the state-run Ab Trav Och Galopp (ATG), over which the government has yet to express any alarm whatsoever.

The BOS further notes that high-rolling online casino players had responded to the government’s SEK5k (US$580) weekly deposit limits by simply spreading their action across a greater number of sites, including sites not holding Swedish licenses.

The BOS claims this robs the government of the ability to know what its citizens are doing online, thereby undercutting the argument that the limits were intended to protect consumers through the detection and prevention of excessive gambling.

The BOS notes that the government has yet to offer any updated statistics on the rate of ‘channeling’ Swedish gamblers to domestic gambling sites, which in April were estimated to be as low as 72% for the online casino vertical. That’s far below the government’s stated aim of achieving a rate greater than 90%.

The BOS further notes that the effectiveness of the government’s Spelpaus self-exclusion register was suffering from this failure to channel players to locally licensed sites. The BOS cited the Spelfriheten gambling addiction treatment agency saying 70% of its patients were already registered with Spelpaus, bolstering the BOS’ argument that consumers will continue to suffer so long as internationally licensed sites are allowed to offer better value to consumers.

Bottom line, the BOS wants the government to “abstain from further repressive measures against gaming companies licensed in Sweden,” while figuring out more effective ways to crack the whip against operators who continue to serve local punters without local permission.