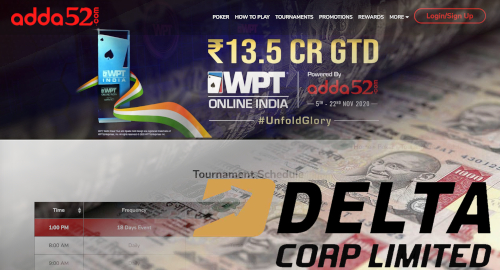 Delta’s casinos in the Indian states of Goa and Sikkim were out of commission for the entire third quarter after being ordered to close in mid-March due to COVID-19. That left Delta’s nascent online ‘skill gaming’ division to carry the load with revenue of Rs446m, which was up 8.9% year-on-year but down around one-fifth from Q2 2020.

It’s unclear precisely what factors contributed to the sequential decline in Delta’s online poker and rummy operations, but hopefully things will pick up in the current quarter given Delta’s partnership with the World Poker Tour on a WPT Online series on Delta’s Adda52 site this month.

Delta got some overdue good news late last month after Goa and Sikkim announced that land-based and shipboard gambling operations could restart operations as of November 1. More good news came last week after the City of Panaji reversed its earlier decision not to renew the business permits of the six floating casinos – three of which belong to Delta – operating on Goa’s Mandovi river.

Delta and other Goa casino operators are required to pay their annual fees upfront but Delta’s Q3 report noted that the casino sector had made a representation to the state government “seeking a waiver / reduction / proportionate payment mechanism” for gaming license fees for the period in which their operations were forced to close.

Goa’s government has suggested it will allow casino operators to pay their license fees on a month-by-month basis, effectively eliminating the need to pay the fees for the months in which they were closed. This move would collectively save casino operators Rs2.77b (US$37.4m).

Publicity surrounding this proposal resulted in a joint letter to Goa Chief Minister Pramod Sawant from Goa’s chamber of commerce, the Travel and Tourism Association and several other local business groups, all of which strongly oppose any casino bailout when the government has so far declined to offer financial help to other sectors negatively impacted by COVID-19.