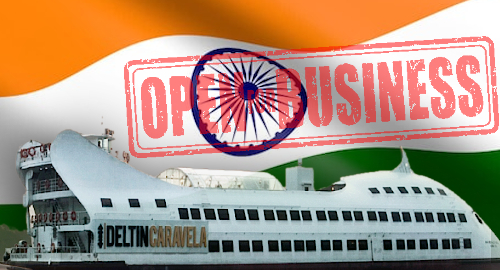 Casinos in the Indian states of Goa and Sikkim are set to reopen this weekend, more than seven months after they were shut due to COVID-19.

On Wednesday, Goa’s Chief Minister Pramod Sawant announced that the state’s casinos – both land-based and shipboard – had been given permission to reopen their doors on November 1. Like most of the world’s casinos, Goa’s gambling venues were ordered closed in mid-March to minimize further pandemic infection.

Sawant said the casinos would have to follow standard operating procedures issued by the Home Department, including a 50% limit of their normal guest capacity for an undetermined period.

Despite their operations having been shut for the past seven months, Sawant said the casinos were still collectively on the hook for over Rs2b (US$27.5m) in license fees for the period in question. These fees must be paid before the casinos can resume operations.

The Home Department reportedly sought to reduce these fees to avoid overburdening operators – who have fixed costs that the shutdown didn’t alleviate them from paying – but some of the cabinet’s more anti-gambling members objected. To counter this setback, Sawant said operators would be allowed to pay their license fees in monthly instalments rather than a lump sum covering the whole year.

The casino restart is part of an effort by the state to kickstart its tourism industry, which has taken a major hit following the pandemic lockdown. Goa currently has just over 2,400 active COVID-19 cases, down from 3,100 a week ago.

Goa’s announcement came one day after India’s largest casino operator Delta Corp – which operates three floating and one land-based casino in Goa – received clearance to reopen its Casino Delta Denzong in the state of Sikkim on November 1. Like Goa, Sikkim ordered its gambling venues to close in mid-March. Delta said its Sikkim casino would operate “in accordance with applicable safety norms,” but didn’t specify whether Sikkim’s limits were the same as Goa’s.

With its land-based venues shuttered, Delta has been leaning on its online gambling operations to keep afloat, although online revenues are a fraction of those produced by its land-based business. Small wonder than that investors cheered the company’s imminent return to land-based action, pushing Delta’s shares up more than 6% by the close of Wednesday’s trading.

Delta’s experience in Goa’s floating casino sector undoubtedly played a role in its decision last week to pay Rs155m (US$2.1m) for a 45% stake in Waterways Shipyard Pvt Ltd (WSPL). The ship-building business in Karnataka on India’s west coast has constructed over 60 vessels, including Delta’s own Casino Royale. The deal is expected to close by the end of December.