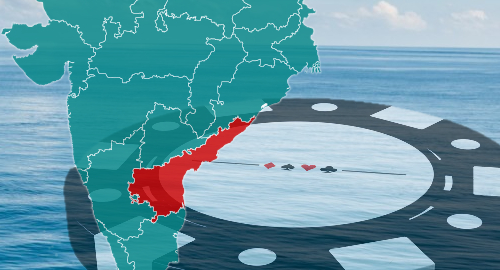 Casinos could soon be floating off the coast of the Indian state of Andhra Pradesh, even as Goa still can’t figure out what to do with its shipboard gambling operations.

On Sunday, Indian media reported that the state government of Andhra Pradesh was “exploring the feasibility” of approving an undisclosed number of floating casinos that would offer gambling along the state’s long coastline facing the Bay of Bengal.

No AP government representative has so far gone on record to confirm the report but an official who requested anonymity said the rationale was simple: “the state doesn’t have any resources” and it’s running out of taxes to hike. A second anonymous official said the floating casino idea had been “explored for some time now.”

The timing of the announcement is strange, coming just one month after the AP government approved amendments to state gambling laws to criminalize online poker, rummy and other ‘skill’ games. The new rules don’t just target operators, as individuals could face six months behind bars just for playing an online hand of poker.

So far, only Goa and Sikkim have authorized casino gambling operations within their borders, and those operations have been shut since March as the local governments looked to minimize further spread of the COVID-19 pandemic.

Goa’s six floating casinos received yet another six-month stay of execution late last month as the state government still hasn’t figured out a permanent long-term plan for its aquatic gambling market. The most recent six-month extension – the latest in a series of extensions issued over the past few years – was set to expire on September 30.

The casinos now have until March 31, 2021 to remain in their current spots on the Mandovi river but the government has yet to indicate any timeline for when they might resume gaming operations. Four casinos hold licenses that expire in 2023, while one casino’s license expires next year and the MV Horseshoe’s license actually expired in 2018 but is currently seeking renewal.

The Corporation of the City of Panaji (CCP), which has to deal with disruptions caused by the casinos’ on-shore activity, said last October that it wouldn’t renew the casinos’ trade licenses when they expired at the end of March. The pandemic shutdown has lessened the urgency behind this stance but the CCP recently stated that its position on this issue hadn’t changed.