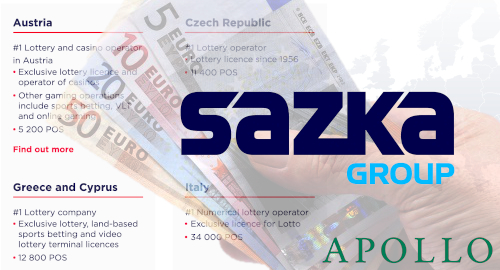 Czech lottery and betting giant Sazka Group is poised for major global expansion after receiving a half-billion-euro injection from a major US private equity group.

The parties said the bulk of Apollo’s €500m investment will go toward acquisition and growth opportunities in Europe and North America, “with a focus on lotteries.” Assuming regulators don’t object, the parties expect the deal to close sometime next year.

Komárek said the partnership with Apollo came following “a series of discussions with major investment funds from around the world” and has positioned Sazka for geographic expansion, “continuing to focus on lottery and complementary gaming verticals.”

Apollo’s name was recently bandied about in respect to a possible acquisition of UK bookmaker William Hill’s retail operations after Apollo’s bid for all of Hills lost out to Caesars Entertainment, who plan to absorb Hills’ US-facing operations while shedding the non-US business.

The bulk of H1’s revenue decline came via Greece, where OPAP – in which Sazka holds a significant stake – was forced to shut its numerical lottery and video lottery terminal networks as the pandemic took hold, resulting in revenue falling €271.7m. It was a different story in the Czech Republic, where revenue increased €18.2m on the strength of digital gaming gains.

In a COVID-19 update released Tuesday, Sazka noted that Greece imposed a second pandemic lockdown spanning November 7-30, leaving only digital operations to carry the load. In Italy, a second lockdown took effect Nov. 6 and will extend through December 3, but LottoItalia’s products remain accessible via tobacconists, which have yet to be shut down.

In the Czech Republic, the limitations on free movement imposed on October 22 have only impacted around 5% of Sazka’s local operations. In the weeks prior to the new limits, around 35% of Czech sales came via digital channels.

In Austria, the month-long restrictions imposed on November 3 have had a ‘limited’ impact on Sazka’s Austrian Lotteries land-based business, while online operations are unaffected. The Casinos Austria brand’s casinos and slots halls have been forced to close.

Sazka CEO Robert Chvatal said his company’s business proved “resilient” during the pandemic’s first lockdown and steps taken since would help see Sazka through this second round of “more targeted” restrictions.

Sazka recently confirmed its interest in bidding to take over from Camelot Group as the next operator of the UK’s National Lottery. Sazka announced last week that it had tapped Sir Keith Mills – who chaired the London’s successful 2012 Olympics bid – to serve as chairman of the company’s bid for the National Lottery contract.