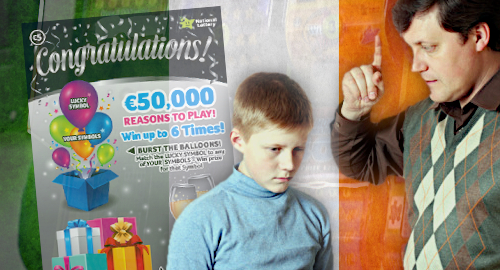 On Thursday, Ireland’s lottery regulator slammed Premier Lotteries Ireland (PLI) for breaching (a) three provisions of the National Lottery Act 2013 and (b) PLI’s lottery license with the government.

National broadcaster RTE reported that the breaches involved three scratch card products in which “the stated number of top prizes available did not match the number approved for each originally.” Two of the games were available last year while the third ran in 2015.

While PLI came forward last December after discovering its mistake, the company was heavily criticized due to its decision to keep the products in circulation without immediately informing customers.

An investigation ultimately concluded that the cockup was the result of human error and PLI’s inadequate control measures. Regulator Carol Boate said PLI had cooperated with the probe and revised its controls to ensure this episode wouldn’t be repeated.

Furthermore, PLI had returned the €180k worth of phantom prizes to players via a special New Year’s draw that PLI funded out of its own pocket, while PLI also made a €50k donation to charity to ensure the company didn’t profit from their mistakes.

PLI isn’t always so quick to return funds to players. In June, the National Lottery regulator reported that nearly €19m was forfeited in 2019 by lottery winners who failed to come forward within the required 90 days. Of this sum, only €187,400 – less than 1% – was returned to players via special draws.

PLI’s deal with the government allows it a lot of latitude when it comes to deciding how much unclaimed bounty – a total of €90m since November 2014, when PLI won the National Lottery license – is returned to players via special draws or additional prizes. The rest goes to marketing PLI’s lottery products, which saves the company from splashing out its own cash on promotion.

Meanwhile, across the Irish Sea, Czech lottery and betting operator Sazka Group has officially declared its interest in bidding for the UK National Lottery license. Incumbent Camelot Group has run the National Lottery since its 1994 inception but its current license expires in 2023 and the UK Gambling Commission (UKGC) formally opened the bidding process in August.

Sazka CEO Robert Chvatal said his company, Europe’s largest lottery operator, had submitted its application to the UKGC by last week’s deadline. Sazka was now busy hiring a UK-based team and building the necessary relationships to deliver “a compelling case which is based on a clear understanding of the needs and desires of all stakeholders and customers.”

Sazka is the first operator to formally declare its interest, although Camelot is presumed to want to retain its UK crown. UK Health Lottery operator Northern & Shell and Australia’s Tabcorp have also been tipped as likely bidders in this contest, the winner of which will be announced next September.