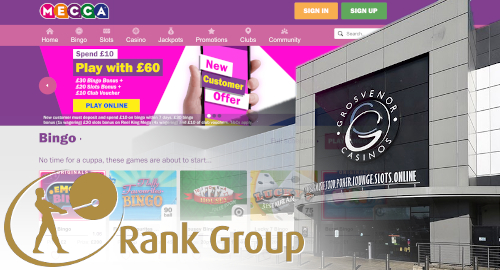 UK gambling operator Rank Group is shoring up its digital bingo offering as its land-based venues fall prey to the pandemic’s second wave.

Rank and Playtech go way back and the parties recently extended their online and land-based casino ties, while Rank has also transitioned its poker operations to Playtech’s iPoker platform.

Last month, Rank CEO John O’Reilly said his company was starting to “successfully emerge” from its pandemic deep-freeze and predicted Rank would be “at cash breakeven or above in September.” And then the UK entered its second wave of COVID-19 infections and all business forecasts went out the window.

Last week, Rank’s  retail managing director Jonathon Swaine publicly tore a strip off the UK government for including casinos in the ‘Tier 3’ pandemic restrictions imposed on certain regions that have failed to get their COVID-19 infection rates under control.

Under the new restrictions, casinos and bingo halls are required to shut but pubs are allowed to go on pulling pints so long as food is served alongside. Swaine called this distinction “grossly unfair,” particularly given (a) the health & safety precautions that casinos (including Rank’s) have gone to great expense to install, and (b) the lack of evidence pointing to any UK casino serving as a ‘super spreader’ hub.

Swaine said the casino sector was being “subjected to an aggressive and needless attack by decision makers who clearly understand nothing of just how safe casinos are and appear determined to damage the land-based betting and gaming industry for the sake of it.”

Regardless of the legitimacy of Swaine’s ire, Rank shouldn’t expect the government to relent anytime soon. Tuesday saw the UK report 367 pandemic-related deaths, the highest figure since May 27, while adding nearly 23k new infections, pushing the overall total over 900k.