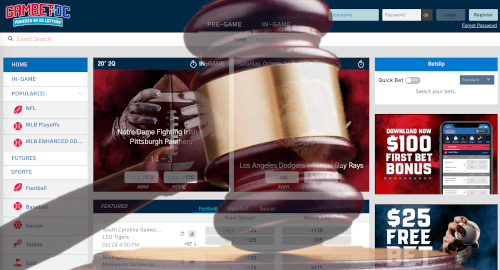 The District of Columbia’s controversial online sports betting monopoly has withstood yet another legal challenge, while the market gets ready to welcome another retail operator.

On Thursday, the District of Columbia Court of Appeals dismissed a 2019 Superior Court challenge of the DC Lottery’s controversial decision to award a no-bid online betting contract to Greek lottery/betting operator Intralot.

The challenge was brought by DC resident Dylan Carragher, a software developer who felt the DC online betting technology contract should have gone through a competitive tender. But the Court of Appeals found that Carragher had failed to demonstrate that he’d suffered any ‘injury in fact’ and thereby lacked standing, leading the Court to dismiss his challenge.

Sadly, while the Court rejected Carragher’s claims that he’d suffered injury from being denied the right to pursue the District’s betting technology contract, it also ruled that Carragher hadn’t suffered any ‘dollars-and-cents’ injury as a municipal taxpayer.

Carragher had argued that DC would have generated more revenue from a more competitive betting product than Intralot’s. But the Court sided with DC’s argument that the “mere loss of potential revenue is not a cognizable injury to the generic municipal taxpayer.”

Oh, no? The Intralot-powered GamBetDC app soft-launched in May and was immediately savaged by bettors for its unattractive odds. Through August, the app generated just $263k in revenue for the city of Washington, while the William Hill retail sportsbook at Capital One Arena generated $104k for the city in its first month of operation.

Hills is about to get some more retail competition as the man behind the Handle19 Sportsbook said this week that he’s aiming for a launch next month. Shane August told SportsHandle that he expects his three-floor, 6k-square-foot Capitol Hill venue to receive its ‘go’ signal from the DC Lottery by the end of October with the official launch hopefully coming before Thanksgiving (Nov. 26).

Handle19 has partnered with USBookmaking, the outfit run by veteran bookmaker Vic Salerno that has to date focused on striking betting deals with tribal gaming operators. Salerno called the partnership “a great opportunity” and vowed that Handle19 “should be a winner from the start.”