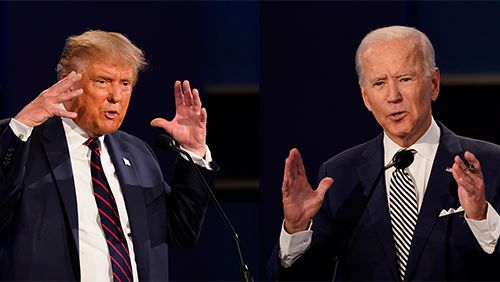 With Americans going to the polls in three weeks, and many having voted already, all signs are pointing to former Vice President Joe Biden winning the election, possibly in a landslide. But we’ve done this song and dance before, most recently in 2016. Could the massive lead Biden has in national polls be a mirage, and could Trump beat him in key battleground states?

There’s two ways to forecast an answer to these questions. If you just want to talk about the election horserace, sites like fivethirtyeight have wonderful forecast models and give a great picture of what polling has to say about the election. But if you’re looking to gamble, Bodog has state by state odds. I’m going to look at both of them.

Trump has 20 states that, either by the odds or by the polls, you can consider him heavily favored. Trump has odds of -450 or better, or a 7-point lead in the polls, in:

Assuming he sweeps all of these, that gets him to 126 electoral votes, 144 shy of reelection.

Biden has 19 states that favor him by the same metrics heavily favor him. Although it should be said that there are 3 states where Biden has at least a 7-point lead in the polls where Bodog has his odds at worse than -450. The 19 states are:

Adding Washington D.C.’s 3 electoral votes, which are a lock for the Democrat, Biden gets 217 electoral votes from these states, just 56 shy of election.

That leaves the 12 states that consist of the battleground, worth a total of 195 electoral votes. It’s conceivable that either candidate could sweep these, which in Biden’s case would result in a landslide. The states are:

Who becomes President based on the polls?

Assuming we go strictly by polling and hand every state to the man leading in the polls today (Wednesday, October 14), Joe Biden wins the election 352 to 186. It would be the biggest electoral college win since 2008, when Barrack Obama beat John McCain.

To get to that number, Biden wins all of the battleground states except Texas, Georgia and Iowa.

Who becomes President based on the odds?

Assuming the favored man in the odds wins in every case, the race gets closer. In that case, Biden wins the election 334 to 204. In this scenario, Trump still wins Texas, Georgia and Iowa, but also picks up Ohio.

If you think Biden’s going to win, betting on him at -200 to win the electoral college doesn’t bring you a great return. Bodog’s pretty good about how they set their odds too, making Pennsylvania, the predicted lynchpin to a Biden win, a -250 state for him. If you want to make money, you need to bet on where he is going to run up the score.

You can get better odds by looking at Florida, Arizona and North Carolina. Biden is only -145 to win these states, but he’s above 50% in the polls for all three, with Trump at 48.5 or worse.

If you’re looking for a long shot Biden win, you have to look at the battleground states he’s expected to lose. Biden is at 48-49% in Texas, Georgia, Iowa and Ohio, but favored to lose in all of them by the odds. Bet on those if you want to get sassy with your money. It’s not worth wagering much on any of Trump’s solid states, as Biden is doing no better than 45.4% in any of them against Trump’s 50% better.

Wagering opportunities: Betting it all on a Trump win

Trump’s currently at +160 to win the whole thing at Bodog. That’s already a great bet to make if you think the polls are all wrong, or if you think Trump could steal the election through the courts. But if you really want to improve your odds, once again, Pennsylvania is where its at.

At +185, you get slightly longer odds on Trump winning PA than you would if you bet on him to win the whole thing. If you want to get really frisky, and think Trump will pull it out by more than 280 electoral college votes, you can also bet on him to win Michigan and Wisconsin, two states he won in 2016 where he now has +220 odds.

But keep this in mind. If you think Trump is going to win reelection fair and square and plan to make some money on him winning Pennsylvania, to keep his job he also needs to win the battlegrounds of Texas, Georgia, Iowa, Ohio, Florida, North Carolina and Arizona.

Waging Opportunity: The polls are wrong!

If you have even an the faintest feeling that the polls could be wrong, Ohio is the state for you. Polls indicate Biden is slightly favored to win this state, with a 0.1% lead over Trump. Bodog, on the other hand, has this state in the Trump column, favoring him -150. One of these two things can’t be right, indicating that you could get some good value betting on Biden here at +115, or that Trump is doing better with the people than the polls say, making him the -150 favorite.

Where could the polls and odds change?

Biden is on the offensive, aggressively trying to take some states of Trump’s potential basket and put them into this. He’s recently been campaigning in Ohio, hoping to lock that state up and really seal up the election.

Trump, on the other hand, is on the defensive, recently campaigning in Florida, just one of the 7 battleground states he needs. He’s returning there tomorrow, while Biden will be in PA for an ABC town hall.