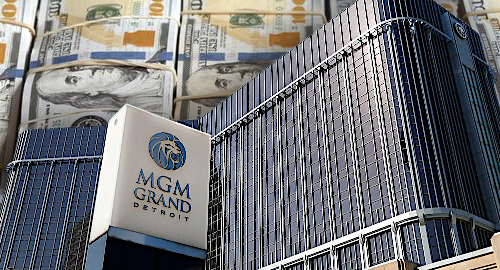 Detroit’s commercial casinos saw their gaming revenue slide 42% in their first month since reopening, while plans to reopen poker rooms are causing confusion down at the state gambling regulator.

On Monday, the Michigan Gaming Control Board (MGCB) announced that Detroit’s three commercial casinos earned a combined $69.3m from their slots and table games in August, down 42% from August 2019. MGM Grand Detroit took the biggest hit, falling 46% to $28.6m, while MotorCity fell 37.5% to $25m while Penn National Gaming’s Greektown tumbled 41.5% to $15.7m.

The three casinos also generated a combined $2m from their retail sports betting operations, with MGM again leading the pack with $932k, followed by Greektown ($551k) and MotorCity ($493k).

The numbers appear dire, but they’re actually better than most forecasts. Detroit’s municipal government’s share of August’s returns was $8.3m, around half what the city would claim in a normal month, but well above the city’s original forecast of $3m.

The city of Detroit earns a significant chunk of its operating budget from its casinos and the over four-month shutdown not only deprived the city of tens of millions of dollars in lost tax revenue, it also resulted in over a thousand casino staff being permanently laid off, putting further strain on the city’s social services.

It’s worth noting that none of the casinos were open for the full month, having received permission to open no earlier than August 5. Greektown and MotorCity opened on that date, while MGM waited an additional two days. Furthermore, all three casinos were restricted to just 15% of their normal capacity, and none of the casinos’ poker rooms were permitted to reopen.

On Sunday, the Detroit News reported that two casinos – MotorCity and Greektown – are making plans to restart poker operations. MotorCity emailed customers telling them that the property’s poker room would open this week, while Greektown was promising poker’s return “in a few weeks.” MGM said its poker room was staying dark for the time being.

The notices reportedly caught the MGCB unawares, with spokesperson Mary Kay Bean telling the Detroit News that the regulator had yet to approve any poker restart. The MGCB’s current rules for most other card-based table games include limits of three players per table, well below the ideal poker number.

Bean said any casino looking to reopen its poker room would have to present a health and safety plan to the MGCB for approval. To date, none of the casinos have submitted such a plan, so perhaps MotorCity poker fans will need to delay their gratification a while longer.