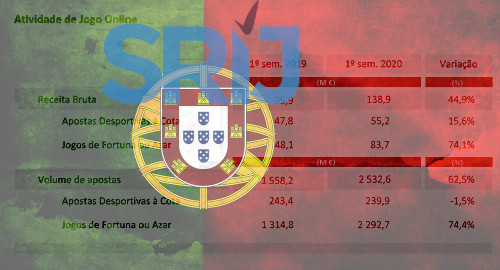 Portugal’s online market started the year off on a strong note, setting a new revenue high of €69.8m in Q1 despite the March suspension of major sports due to COVID-19. But the SRIJ claims the market experienced “significant and atypical variations” in gambling turnover in April and May as pandemic boredom set in.

Interestingly, while slots continued to account for the bulk of online casino play, its share dropped to its lowest level (61.7%) in April, the month in which online casino spending peaked. That month saw online poker’s share of casino spending hit a high of 14.4% before falling back to earth in May (10.7%) and June (8.7%).

The SRIJ noted that despite Portugal’s online market being “not very mature,” it had nonetheless “proved capable and apt … resisting and adapting in a period of great changes.” As of June, the market had resumed “a progressive and gradual activity, returning to game patterns” seen before the pandemic took hold.

In April, Portuguese politicians approved legislation that authorized the government to establish “partial or total limitations on access to online gaming platforms” during the pandemic. However, the government never followed through on this plan, as the state of emergency had been lifted by the time the Ministry of Economy got around to contemplating how the measure would be imposed.

The market welcomed one additional licensee during Q2, as Bidluck SA was granted an online casino permit for its Bidluck.pt site.

In May, the SRIJ issued a manual of best practices for gambling advertising, which barred radio and TV spots between 7am and 10:30pm, as well as prohibiting ads in the half-hour immediately before and after a kid-focused program.