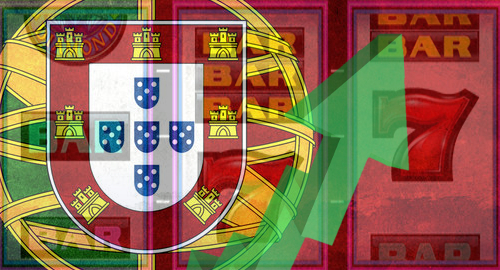 Portugal’s online gambling market set another revenue record in Q2, thanks to a serious surge in online casino activity.

The gains are all the more impressive given that Q2 2018 featuring the opening rounds of the FIFA World Cup. However, the SRIJ had licensed 11 entities to operate online gambling by Q2 2019, three more than the same period last year. These entities held a total of 18 product licenses (eight sports betting, 10 casino), five more than the year before.

Online casino (including poker) revenue shot up by more than one-half to €25.3m, eclipsing sports betting for the first time. Online casino spending totaled €700m, up an astonishing 214% year-on-year and 91% sequentially.

Poker cash games (7.5%) outpaced tournaments (3.8%) for a combined poker share of 11.4%, a 2.5-point decline from Q1, the fourth straight quarter of poker negativity. The SRIJ has to date licensed only two poker companies – PokerStars and 888 – and the latter firm didn’t receive its international liquidity sharing approval until after the second quarter concluded.

The market’s overall gains came despite a decline in new account registrations, which fell 1.6% year-on-year while plunging 23% sequentially. Active accounts totaled 297k, up a healthy 16.3% year-on-year but down 6.6% from Q1.

Nearly half (49.1%) of active gamblers placed only online sports bets in Q2, while 35.5% played only online casino products and 15.4% were online hermaphrodites who enjoyed both verticals.

The government’s share of Q2’s bounty came to €21m, up nearly one-quarter year-on-year. Despite ongoing licensee grumbling, Portugal’s government has shown no signs of reviving stalled plans to impose a new online gambling flat tax rather than the punitive tax on sports betting turnover.

To keep this revenue stream flowing, the government continued its crackdown on internationally licensed operators serving the Portuguese market without local approval. The SRIJ fired warning shots across the bow of 21 additional international sites in Q2 and ordered local internet service providers to block the domains of 22 sites.