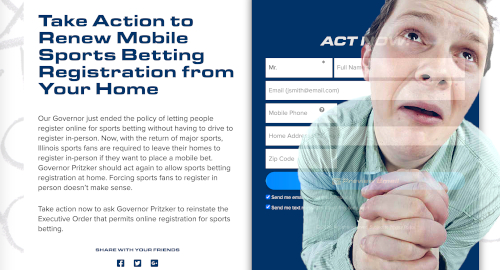 Casino operator Boyd Gaming has struck a Nevada sports betting deal with International Game Technology (IGT), while FanDuel is prepping its Illinois market launch courtesy of a local Boyd casino and DraftKings is urging bettors to direct their rage at Illinois politicians.

On Wednesday, IGT announced a “long-term” deal to supply Boyd’s Nevada properties with its PlaySports platform for both retail and online wagering, while the venues will also feature IGT’s self-service PlaySports Kiosks. The deal expands on the firms’ existing sports betting partnerships in Indiana, Iowa, Mississippi and Pennsylvania.

FanDuel also has an online gambling partnership with Boyd that is poised to take root in Illinois, although the timing remains a mystery. FanDuel received its temporary betting permit from the Illinois Gaming Board a month ago but Boyd’s Par-A-Dice Casino in East Peoria has yet to receive formal permission from the Board to launch betting operations.

The lack of urgency may be due to Illinois Gov. J.B. Pritzker’s late-July decision to reimpose in-person registration requirements for sports bettors. The restrictions had been lifted in June due to the state’s casinos closing due to COVID-19 but someone — presumably with an axe to grind against DK and FD — appears to have whispered into Pritzker’s ear.

Boyd’s East Peoria casino is around 165 miles from Chicago, whose bettors would be forced to drive close to three hours (each way) to sign up for FanDuel’s betting app. Still, that’s two hours shorter (each way) than Chicago bettors have to drive to sign up with DraftKings.

DraftKings bought a stake in the Casino Queen in East St. Louis in late-July, a move intended to circumvent state rules that compel online-only operators to use the brand of their retail partners. DraftKings likely spent big to rebrand the property DraftKings at Casino Queen, but the ability to market using the DraftKings name doesn’t mean much when you’re that far away from the state’s major population hub.

(FanDuel had originally planned a similar scenario with the Fairmount Park racetrack, which would have been rechristened the FanDuel Sportsbook & Horse Racing. But the track has yet to receive its Master Sports Betting License, let alone its go-live signal from the Gaming Board, so FanDuel is choosing the path of least resistance with Boyd, even if it’s suboptimal from a branding perspective.)

Sports Handle reported that DraftKings is now directing customers to a website, Fans for the Future, encouraging Illinois residents to enter their contact information. Emails containing one of three messages will then be automatically sent to Pritzker and the bettor’s local state representative and senator, urging them to reinstate online registration.