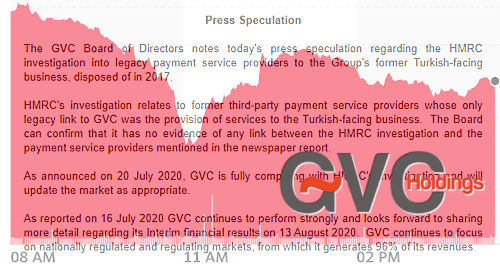 GVC’s shares sunk nearly 9% in Thursday’s early trading on the London Stock Exchange, and while the shares have staged a minor rebound, they’re currently sitting around 5% below Wednesday’s close.

The drop appears to have been caused by a speculative op-ed in the Times by Alistair Osborne. The op-ed cited a theory by some short-sellers who wondered if there was some connection to Wirecard in the recent announcement by Her Majesty’s Revenue & Customs (HMRC) that it was “widening the scope of its investigation” into GVC’s former Turkish-facing operations.

The Times article noted that Senjō Group Pte Ltd, the Singaporean firm that acquired Kalixa from GVC, is currently under investigation for its role as a ‘third-party acquiring partner’ of Wirecard. Such third-party arrangements allowed Wirecard to continue collecting commissions on transactions involving sectors with which it no longer wished to be publicly associated.

In 2019, GVC effectively gave away its highly lucrative but legally sketchy Turkish-facing operations to an individual connected with GVC’s former CEO Kenny Alexander, who abruptly retired just days before the HMRC announcement. Last summer, GVC felt compelled to deny public reports that it was somehow still benefiting from its former Turkish business.

GVC reiterated that it was “fully complying” with the HMRC probe and would update the market as warranted. The company is scheduled to hold an analyst call on August 13 to discuss its H1 results, which GVC said would emphasize the 96% of revenue generated from “nationally regulated and regulating markets.”