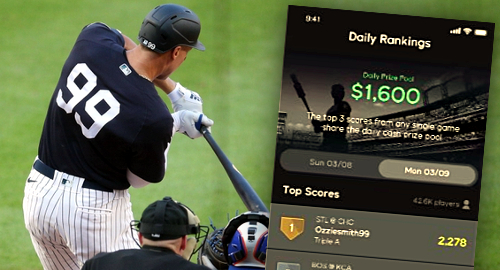 Major League Baseball’s gaming partnership with casino operator MGM Resorts is rolling out a free-play pseudo-betting product that will invariably spark cries to the heavens about corrupting America’s youth.

The Rally apps allows players to earn points by predicting both the outcomes of games, the margin of victory and well as in-play game elements such as whether a batter will strike out, get on base or hit a homer. Accrue enough points over the duration of each contest – be it a single game or the entire season – and you can win prizes, including cold hard cash.

MLB insists that its app won’t connect to a BetMGM real-money sportsbook but this is ‘Murica, and so the boo-birds are already out in force decrying this apparent grooming of children for actual betting once they attain the age of majority in whatever state they call home.

In other taboo-shattering MLB news, the league announced Monday that it would for the first time allow on-field advertising during games, including digitally imposed ads for games broadcast on TV or streamed online. The officially approved locations for these ads include the back of the pitcher’s mound, behind home plate and on the grass outside the first-base lines.

The league is reportedly keen on offering ways to enable stakeholders – including MLB itself – to “fulfill marketing commitments” during its shortened 60-game, no-bums-in-seats season. The question now becomes – will betting operators be permitted to run on-field ads in states in which they’re licensed to operate?

Baseball viewers have already reported seeing a TV commercial for bookmakers PointsBet during Monday’s pre-season game featuring the Phillies and Yankees on the YES Network. Australia’s PointsBet is evidently serious about making inroads with US baseball bettors, recently announcing a gaming partnership with the Detroit Tigers, the first such deal for an individual MLB club.