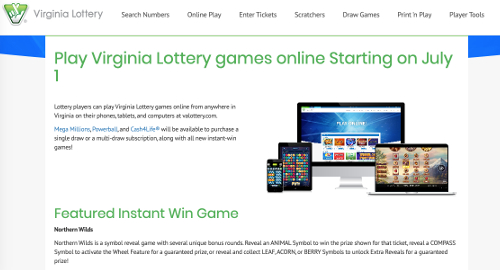 For some time now, the Virginia Lottery has allowed players 18 years or older to purchase online subscriptions to major draw ticket games such as Mega Millions, Powerball and Cash4Life. But legislation approved in March cleared the way for the Lottery to offer individual ticket sales as well as new instant-win games.

Virginia Lottery exec director Kevin Hall said his group would be launching its new online service on July 1, the very first day permissible under the new state rules. Hall said it was “important to continue to meet Virginia consumers where they already are and where they expect to find us: online.”

The plan is to start with the draw-ticket mainstays and a few instant-win products, with additional instant games added every few weeks and daily draw games added before the year is done. The digital instant win games will resemble their retail counterparts “but with exciting digital game features, mechanics and bonus rounds that paper tickets cannot provide players.”

The new digital games will initially not be available via the Virginia Lottery mobile app, which was originally developed by Lottery tech partner International Game Technology to work only through Bluetooth signals from lottery retailers. The Lottery is working on updating the app to include online play but it won’t be ready by July 1, so mobile users will have to make do with the website for the time being.

The rationale for having an online lottery option became crystal clear to lottery operators following the COVID-19 shutdown of retail lottery outlets. In April, Hall warned legislators that sales had been “significantly diminished due to the public health emergency.”

The states that got out ahead of this curve, including Georgia, Kentucky, Michigan, New Hampshire and Pennsylvania, have been busy trumpeting their success. Pennsylvania announced last month that its iLottery sales had topped $1b in less than two years, a success that has helped convince other states to get off the bench and into the action.