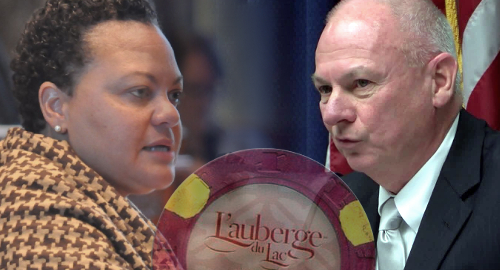 Louisiana got a new gaming regulatory boss on Wednesday, 48 hours after the last chief was unceremoniously turfed from office without explanation.

On Wednesday, Gov. John Bel Edwards named Mike Noel, currently chief of staff to the Louisiana State Police Superintendent, as the new chairman of the Louisiana Gaming Control Board. Noel will start his new role next week but his appointment will need to be confirmed during next year’s legislative session.

Jones’ rejection came after a behind-closed-doors senate meeting on the final day of the legislative session. Jones (pictured right) was one of 11 nominees for various agency or board appointments who failed to make the final list of around 700 names – which included two other incumbent members of the Gaming Control Board – that was approved in a single vote after the internal debate.

Jones told the Associated Press that he learned the news via a phone call from a senate staffer, and that the rejection was “a total surprise.” Jones added that he “felt blindsided and somewhat betrayed by the process.”

Edwards was equally surprised and annoyed by the rejection, issuing a statement saying that it was “especially disturbing and unfortunate” that the Gaming Control Board had been deprived of “experienced leadership” just as the state’s casinos are reopening following their lengthy COVID-19 closures.

Local media suggested that Sen. Karen Carter Peterson, who represents Jones’ home district in New Orleans, had a hand in the ouster. Tradition allows individual senators to block the appointments of individuals from their districts without citing any justification. Peterson has yet to comment on the matter.

Last year, Peterson (pictured left) was forced to publicly acknowledge that she had a gambling problem after she was discovered on the gaming floor of the L’Auberge Casino in Baton Rouge. Prior to that discovery, she’d put her name on a self-exclusion list that was supposed to prevent her from accessing casino gaming products. Peterson received a misdemeanor summons for violating the rules.

Jones told The Advocate that he’d attempted to meet with Peterson to reassure her that, while he’d known about her name being on the self-exclusion list “for a long time,” he was not behind her public outing as a problem gambler but that she’d refused to meet with him.