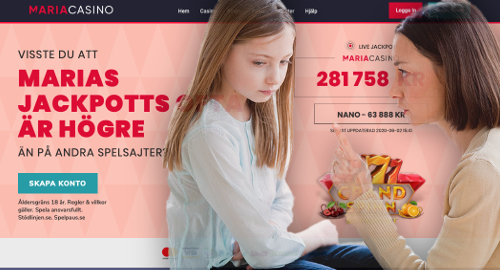 Online gambling operator Kindred Group’s ads for its female-focused Maria Casino brand have been found to be misleading by Sweden’s Advertising Ombudsman.

In a decision dated May 26, Sweden’s Reklamombudsmannen (RO) ad watchdog upheld a complaint brought against a 20-second television commercial for Kindred’s Maria Casino brand for claiming to be “Sweden’s most popular gaming site.”

The ad referenced Maria increasing its payout rate to customers from 96% to 98%, which allegedly helped make the Maria site so popular. But when the complainant queried Maria’s customer service as to the source of its ‘most popular’ claim, the reps reportedly cited only “some reviews on their website.”

In response to the complaint, Kindred cited a survey of 1,660 customers conducted by researchers Nepa AB in the first three months of 2020 that showed Maria leading all rivals in the choice of online casino sites with 12.4%, nearly double the 6.3% of its closest rival Mr Green (a William Hill brand).

The RO countered this claim by saying Kindred “has not presented any evidence showing that the customer survey has been conducted in a way that means that the result can be considered reliable.” The RO also noted that the survey question “is limited to online casinos” while the Maria brand’s popularity claim “is more far-reaching than that.”

The RO ultimately concluded that the Maria ad was misleading and thus contravenes Article 5 of the International Chamber of Commerce’s rules for advertising and marketing communications.

This is the second time that the RO has rapped Kindred’s knuckles over its advertising claims. In February, the RO found fault with an ad for Kindred’s flagship Unibet brand that claimed its casino games’ returns to player were the “highest in Sweden.” The RO ruled that Kindred had failed to substantiate this claim.

Sweden’s online gambling advertising sector has come under increased scrutiny since the regulated market’s launch in January 2019. Kindred ranked 17th on the list of Sweden’s top advertisers in March, behind only Cherry AB and the state-run Svenska Spel among gambling operators, although Kindred’s spending was down nearly two-thirds from the same month last year.

In January, Sweden’s government announced it would conduct a study of its gambling licensees’ advertising activity, after previously warning that it could decide to impose a “total or partial ban” on gambling ads. The survey was supposed to have been released in March but has yet to see the light of day.