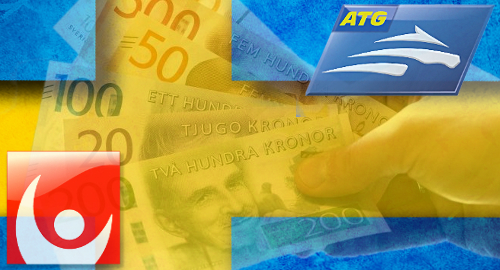 Sweden’s state-run gambling firms Svenska Spel and Ab Trav Och Galopp (ATG) both saw increased profits in the first quarter of 2020, a time in which most of the market’s private online gambling licensees struggled.

An interim report covering the three months ending March 31 shows Svenska Spel’s revenue effectively unchanged from the same period last year at SEK2.05b (US$207.8m), while operating profit shot up 35% to SEK701m and net profit rose one-third to SEK545m, in part due to the company reducing its marketing expenses.

Svenska Spel’s dominant Tur lottery division reported revenue rising 4% year-on-year to SEK1.14b thanks to a string of high jackpots. The Sport & Casino unit saw its revenue dip 1% to SEK538m, largely due to the mid-March cancellation of live sports due to the COVID-19 pandemic.

The reduction in land-based options helped drive Svenska Spel’s online revenue up 13% to SEK834m in Q1, pushing digital’s share of Q1 revenue up five points to 41%.

Svenska Spel CEO Patrik Hofbauer said the company’s future is “more uncertain now than we are used to, but we are addressing it with an offensive focus and with continued concern for our customers.”

ATG OFF TO THE RACES
ATG’s first quarter was equally bullish, with net gaming revenue up nearly 11% to SEK1.1b, operating profit up nearly one-fifth to SEK343m and profits up 18% to SEK327m.

Unlike most race betting operators, ATG’s business didn’t suffer greatly from COVID-19 as Sweden opted for a more liberal approach to social distancing. In fact, ATG’s business got a boost as race bettors scoured the globe for alternatives to their local racing markets.

Racing revenue was up 2% to SEK902m while sports betting rose by more than three-quarters to SEK95m and online casino rose 28% to SEK78m. It should be noted that ATG only began offering these products on January 1, 2019 with the launch of Sweden’s liberalized online market, and they’ve now had a full year now to hit their stride.

The sports betting vertical also got a boost from the acquisition of Ecosys, which operates the Danish-facing Bet25.dk. The site was officially absorbed into the ATG fold in April 2019, and its operations boosted ATG’s revenue by four points in the most recent quarter (although Bet25’s revenue actually shrunk considerably during that span).

Chief exec Hasse Lord Skarplöth said ATG has been ahead of the curve in terms of responsible gambling during the pandemic. ATG introduced mandatory online casino loss limits in late-March, a full month before the government mulled imposing a sector-wide limit program. ATG also suspended online casino marketing until further notice, even though the company said its yet to see any pandemic spike in its customers’ problem gambling signals.