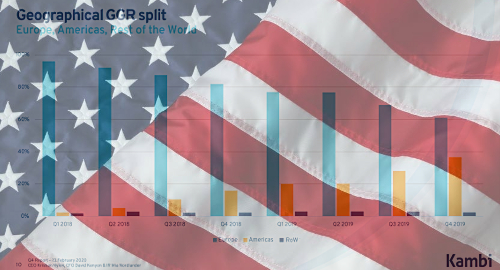 Sports betting technology provider Kambi is celebrating its US market expansion, even as its biggest client DraftKings prepares to cut ties with the company.

Kambi’s sportsbook clients enjoyed 52% higher year-on-year turnover in Q4 – 36% higher than they reported in Q3 – reflecting the company’s signing of new deals and expansion into more US states where sports betting is now legal. Operator turnover for FY19 was up 37% from 2018.

For the first time, Kambi revealed the geographical split of its revenue, with Europe accounting for 61% of Q4’s take, while 37% came via the Americas – of which only about one-quarter came from Latin America – and just 2% from the rest of the world. As recently as Q1 2019, Europe accounted for over 90% of Kambi’s revenue.

Kambi offered some further insights into its US operations, including that NFL betting generated more turnover in Q4 than any other sport, including English football. Kambi said the recent Super Bowl attracted over three times the turnover on the 2018 World Cup final match.

DraftKings dropped a bomb on Kambi in December, announcing that it was acquiring Kambi’s European rival SBTech. The news came just four months after Kambi and DraftKings had expanded their US-facing partnership to eight additional states.

Nylén said Wednesday that this deal means that DraftKings “will no longer be dependent on Kambi” but claimed that Kambi’s revenues from DraftKings “are likely to be unaffected throughout 2020.”

Nylén insisted that Kambi remains “firmly committed to the US” and its “diverse network of partners.” Kambi said these other partners generated “40-50%” of its US revenue in Q4. Kambi is currently developing a Barstool Sports-branded sports betting app for its client Penn National Gaming that will be unveiled in August.