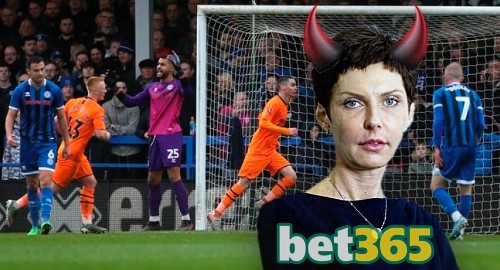 The UK’s anti-gambling media has turned its outrage volume to 11 after learning that online betting operator Bet365 has been streaming English Football Association (FA) Cup matches to its customers.

On Tuesday, the usual media suspects, led by the reliably hyperbolic Daily Mail, lost their narrow minds after learning that Bet365 had been streaming some FA Cup third round matches to customers via its website and betting app.

The FA, the governing body of UK football, famously broke with its former betting sponsor Ladbrokes in 2017, three years before their deal was to expire, after determining that relationships with gambling and alcohol companies were inappropriate. The FA said at the time that it would forego any future deals with betting operators.

But the FA has a media deal with sports rights agency IMG that predated the Ladbrokes sponsorship’s demise, and IMG struck a six-year streaming rights deal with Bet365 that took effect at the start of the 2018-19 season. To stream the FA Cup matches on Bet365’s site or mobile app, customers would either have to place a pre-match wager or open an account with a minimum £5 deposit.

The gist of the Mail’s ire is that the great masses of UK football fans couldn’t watch as many matches on free TV as they could if they signed up with Bet365, which sounds more like an issue to take up with the BBC, but never mind, the prudes are on a roll.

The Mail also took offense at the fact that Bet365 had the audacity to promote their betting markets while fans watched the streaming coverage, which is sort of like complaining that Mickey Mouse has the unmitigated gall to strut around Disney World, but whatever.

The Mail’s chosen headline – ‘FA Cup betting deal’s slap in the face to Prince William’ – is a clear attempt to enlist the dwindling number of Windsor-watchers into the outrage brigade. Many of the this weekend’s matches were preceded by a one-minute message from Wills looking to raise awareness of mental illness, which evidently much of the Mail’s editorial board suffer from.

The brouhaha has played out pretty much the way these things do, with all the other anti-gambling media piling on with their own dollops of outrage, while anti-gambling politicians are urging the FA to break a perfectly legal contract to prevent Bet365 boss Denise Coates — who the Mail weirdly described as having “manicured fingertips” — from stuffing even more millions into her purse.

The FA sought to downplay the uproar by issuing a statement saying it would “review this element of the media rights sales process ahead of tendering rights to the new cycle from the 2024-25 season onwards.”

The new year is only one week old and the UK gaming industry has already endured two ‘scandal’ sessions, following the Guardian’s disclosure of a UK Gambling Commission report that cast shade on gaming operators’ VIP programs. Should be a fun year.