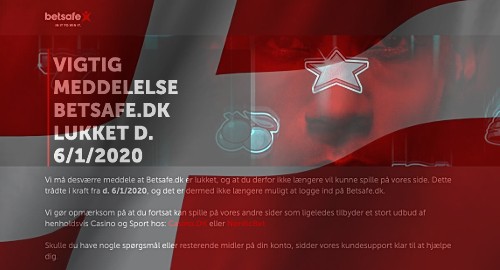 Denmark’s online gambling tax hikes won’t kick in for another year but have already claimed their first victim, as Betsson shuts its Betsafe brand’s Danish-facing site.

On Monday, Betsafe.dk posted a notice to its home page informing customers that the site “is closed and that you will therefore no longer be able to play on our site.” The notice invited customers to “play on our other sites” Casino.dk or NordicBet, while inviting players looking for their funds to contact customer support.

Pontus Lindwall, CEO of the Stockholm-based Betsson, told local media that the company had decided to “withdraw a brand” from the Danish regulated online gambling market due to “the announced tax increase.” Lindwall said his company was choosing to “spend the money on those brands that we should have” in Denmark.

Last December, Denmark’s government announced that it would boost its online gambling licensees’ tax rate on gross gaming revenue from 20% to 28% effective January 2021. The government justified the hike by pointing out that land-based gaming operators pay much steeper tax rates, so basically online operators should be thankful they had it so good for so long.

Lindwall noted with some bitterness that the Danish government itself expects online gambling turnover to suffer as a result of the increased tax rate. Danish sites are expected to offload some of their new tax burden onto their customers, which could increase the number of punters seeking out more attractive options from internationally licensed gambling sites.

Denmark’s regulated market has been hailed as a success for its ability to ‘channel’ local gamblers to locally licensed sites but Lindwall said the government’s admission that “channelling will be adversely affected” by the new taxes is “an offensive act” in terms of gaming policy.

Betsson’s shares appeared to dip on Monday’s news, losing nearly SEK1 before rebounding to close out Tuesday’s trading up less than 1% to SEK43.60.