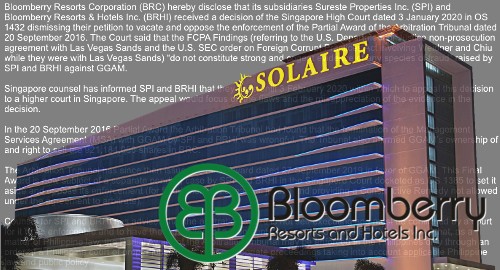 Philippine casino operator Bloomberry Resorts Corp has lost its bid to dismiss a $296m penalty for early termination of a supplier contract.

On Monday, Bloomberry informed the Philippine Stock Exchange that the Singapore High Court had issued a decision on January 3 dismissing the company’s petition to vacate the partial award of the arbitration tribunal dated September 20, 2016. That dispute involved Bloomberry’s former relationship with a unit of US-based Global Gaming Asset Management (GGAM).

GGAM had been hired to help deliver a steady stream of VIP gamblers to Bloomberry’s Solaire Resort & Casino, the first integrated resort casino to open in Manila’s Entertainment City gaming zone. But Bloomberry terminated the deal in September 2013, just one year into a five-year pact, based on Bloomberry’s assertion that GGAM had failed to deliver on its promises.

GGAM promptly retaliated by seeking to dump its 8.7% stake in Bloomberry, a move the casino operator sued to prevent. Last September, the Singapore arbitration tribunal sided with GGAM and ordered Bloomberry to pay GGAM total compensation of US$296m, including payment to GGAM for repurchasing its Bloomberry shares.

Bloomberry’s appeal of the arbitration ruling centered on the fact that GGAM is run by William Weidner, who previously worked for Las Vegas Sands. Bloomberry alleged that GGAM had engaged in “fraudulent concealment and misrepresentations,” apparently by failing to inform the company of Weidner and another GGAM exec’s possible connection with a US federal investigation into Sands’ possible violations of the Foreign Corrupt Practices Act (FCPA).

The alleged FCPA transgressions occurred over 10 years ago, and involved Sands’ payments to Chinese consultants. In March 2013, around six months before Bloomberry turfed GGAM, Sands alerted the feds to the possibility that it might have violated the FCPA. In January 2017, Sands reached a $7m settlement with the US Department of Justice to resolve the probe.

Bloomberry’s Monday announcement said the Singapore High Court had concluded that the company’s allegations against GGAM “do not constitute strong and cogent evidence of any species of fraud.” Bloomberry’s shares closed Monday down 3.2% from their opening price.

Bloomberry indicated that the Court had given it until February 3 to file an appeal to a higher court in Singapore, and the company’s appeal will reportedly center on “the flaws and the misappreciation [sic] of the evidence in the decision.”

Bloomberry also attempted to reassure investors by saying any judgment against the company “may be enforced in the Philippines only through an order of a Philippine court of proper jurisdiction, after appropriate proceedings taking into account applicable Philippine law and public policy.”