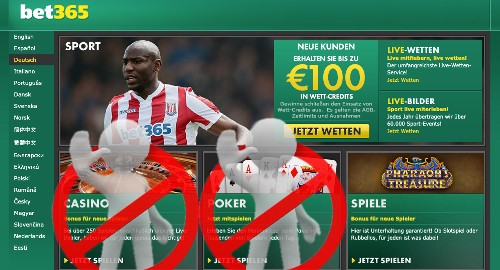 UK online betting giant Bet365 is preparing to shut its Germany-facing online casino before the new year in order to comply with the market’s new licensing regime.

On Tuesday, eGaming Review reported that Bet365 had advised its affiliate marketing partners that it will stop offering online casino products to German customers as of December 30. The email asks affiliates to remove “any promotion of any of Bet365’s non-sports products in German” by that date. The email clarified that Bet365’s online casino “will still be available in Austria.”

Under the stopgap federal gambling treaty that Germany’s 16 states approved this spring, online gambling companies are eligible to apply for sports betting permits that will take effect January 1, 2020 and be valid until July 1, 2021, by which time the states hope to approve a permanent regulatory regime.

But German licensees will face strict limits, including no in-play wagering, online casino or poker products. In July, the Regional Council of Darmstadt in the state of Hesse advised would-be betting licensees to halt all “unauthorized gambling” in Germany, whether that unauthorized activity was offered directly through the sites “or through affiliated companies.”

The Council repeated this warning in November, apparently fearing that its earlier message was being ignored. Those fears were confirmed this month when Hesse’s Minister of the Interior Peter Beuth revealed that the Council hadn’t received a single application for a new German online betting license. Beuth “urgently” warned operators that failure to apply for a new German license would leave them “liable to prosecution.”

At this point, it’s unclear how many German-facing operators were confused over whether the January 2020 timeline represented the new temporary regulatory regime’s official launch or whether that date was when they could start filing license applications.

There’s also the distinct possibility that, given Germany’s poor record for sustaining its various regulatory updates, some operators have chosen to take the risk of ignoring the Hesse ultimatums and waiting for the permanent treaty to arrive.

Germany’s states are sharply divided on what form their permanent gambling treaty should take, with states like Hesse, Schleswig-Holstein and Rhineland-Palatinate arguing for a more liberal regime in order to ensure a high degree of channeling of German gamblers away from unauthorized sites.