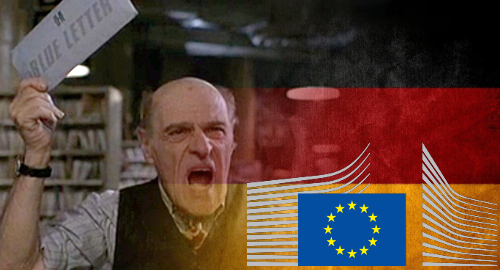 The European Commission (EC) has once again cast doubts on Germany’s sports betting liberalization plans, but the architects of these plans reportedly don’t give a toss.

On Monday, German media reported that the EC had issued a so-called ‘blue letter’ regarding Germany’s plans to commence licensing sports betting operators as of January 2020. The letter, dated July 30, expresses doubts that the country’s third State Treaty on Gambling will achieve its aims of decreasing the size of the grey/black betting market.

In March, the 16 German states approved their new stopgap treaty, which will extend the current ‘toleration’ of sports betting operators. Those operators lucky enough to have their betting license applications approved come the new year will be allowed to operate in Germany until June 30, 2021, by which point the states hope to have crafted a more permanent treaty.

But the EC believes this 18-month window of interim licensing is too short a duration – even with an option to extend these licenses for a further three years – to ensure a sufficient volume of unauthorized operators apply for the new licenses.

Essentially, the EC feels the stopgap treaty may encourage operators to remain on the outside, which would also allow them to continue offering online casino products, which remain verboten under the stopgap treaty and may not make the final treaty, assuming the 16 states ever reach consensus on what that treaty should contain.

A blue letter is the first move in the EC’s playbook for warning member states not to proceed with legislation the EC views as flawed. Should a member state ignore this warning, the EC could pursue formal infringement proceedings.

The EC has been down this road before, having found fault with the second state treaty’s imposition of a hard cap on the number of licenses available. The EC similarly rubbished subsequent efforts to craft a regime that would find favor with the European Union’s regulatory overseer.

However, German state regulators are reportedly unfazed by the EC’s ongoing disapproval. A spokesperson for the State Chancellery of North Rhine-Westphalia was quoted saying the EC’s opinion “does not contain any points that could give cause for change in the specific content” of the stopgap treaty. Given that the whole European Union model is looking shakier by the week — take a bow, Italy — Germany may have cause to treat the EC as more irritant than arbiter.

Plenty of gambling operators have also found fault with the new treaty, and the license duration and online casino ban are far from their only concerns. There’s also a €1k monthly spending limit per customer, a ban on in-play wagering and a stiff 5% tax on betting turnover.