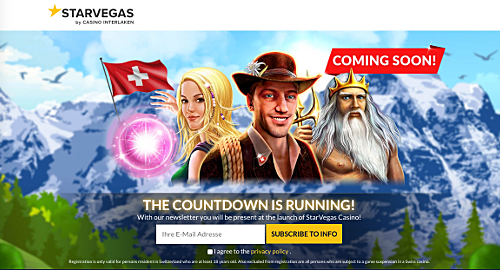 On Wednesday, the Swiss Federal Council announced that it had approved an extension of the gaming licenses of land-based operators Grand Casino Kursaal Bern AG and Casino Interlaken AG to offer online casino games. The casinos can launch online operations as soon as the Federal Gaming Board (ESBK) approves their online gambling product offering.

Casino Interlaken is already teasing a countdown to the launch of its gambling website, which will operate under the StarVegas brand. StarVegas is operated by Novomatic’s Malta-licensed Beatya Online Entertainment subsidiary, and is already operational in Italy and Spain. The Bern venue, which is operated by Casinos Austria International, has yet to detail its online plans, but CAI has partnered with online gambling operator Betway in other markets.

The ESBK previously approved four other casino operators launching online in June, so Wednesday’s additions will bring the total number of approved online operators to six. There are 21 land-based casino licensees, all of which are eligible to apply for online licenses under the gambling expansion legislation that took effect on January 1.

So far, all of the casinos that have received permission to launch online have been those in German-speaking regions of the country. To date, none of the six casinos in Swiss cantons where French is the predominant language have applied to operate online although an exec at the Barrière Group recently told local media that the company hoped to get underway sometime next year.

Neither the ESBK nor the Swiss Lottery and Betting Board (Comlot) have issued a November update to the country’s blacklist of internationally licensed online gambling operators deemed to be serving Swiss punters without Swiss permission. The last updates from either regulatory body were issued in mid-October.