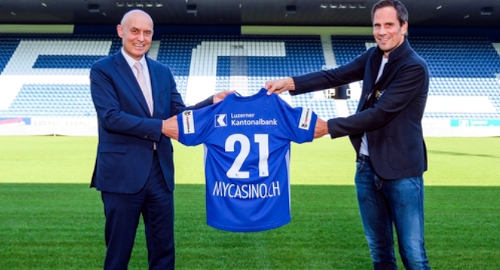 On Wednesday, top-tier Swiss footballers FC Luzern announced a new shirt sponsorship deal for the 2020-21 season with Mycasino.ch, the online gambling site of land-based operator Grand Casino Luzern AG. The deal will see Mycasino.ch spelled out on the back of the club’s shirts under the players’ numbers.

Mycasino.ch was among the first to launch in Switzerland’s regulated online casino market and the site was recently revealed as the market leader with revenue of CHF9m (US$9.9m) in 2019, topping the combined CHF7.6m raised by the Stadtcasino Baden group’s two sites (Jackpots.ch and Casino777.ch).

There are presently five active Swiss-licensed online casinos, while two more operators have been cleared to launch but have yet to actually debut their efforts. Group Partouche’s Casino du Lac Meyrin in Geneva is currently promoting its ‘Pasino’ site as ‘coming soon’ while the Casino Lugano is keeping mum on its launch timeline.

This failure to launch left these two casinos with no way to generate revenue during the months-long pandemic-related shutdown of all Swiss gambling venues that began in March. The operators who were able to launch ahead of the shutdown said the ability to earn some online revenue was a bonus but it couldn’t totally offset the land-based losses.

Meanwhile, Swiss regulators’ efforts to clear a path for their domestic licensees continued last month as both the federal gaming board (ESBK) and the Swiss Lottery and Betting Board (Comlot) added new names to their blacklists of unauthorized gambling domains that local internet service providers are required to block.

As with previous efforts, the bulk of the 45 new additions are sketchy Curacao-licensed online casinos, although German operators Interwetten and Mybet added to their existing black marks and Malta-based Meridian Gaming made its official debut on Comlot’s list.