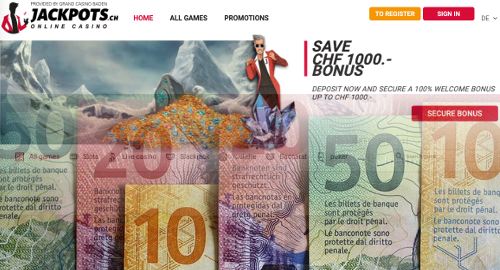 On Monday, certain segments of Switzerland’s retail sector began reopening after the mass shutdown of non-essential businesses to limit further spread of the COVID-19 coronavirus. Businesses ranging from hair salons to garden centers were first in the reopening queue, while compulsory schools and other stores will follow on May 11.

But the ‘entertainment’ sector of the economy reportedly won’t get the nod to reopen until June 8, so Switzerland’s 21 land-based casinos – which were ordered to shut their doors in mid-March – will have to sweat it out a little longer.

To date, only five Swiss casinos have availed themselves of the option to launch online casinos under the new rules that took effect in January 2019. Casino Interlaken was the most recent online participant following the launch of StarVegas.ch in February.

Brose said the two online casinos – Jackpots.ch (Baden) and Casino777.ch (Davos) – had gotten a boost following the shutdown of retail operations but were currently only compensating for “a certain part of the lost revenue.” Brose declined to offer specifics, citing competition concerns.

Speaking of, Grand Casino Luzern CEO Wolfgang Bliem says his group’s Mycasino.ch site is currently the king of Switzerland’s regulated online market, but he too declined to offer specifics to support this claim.

Bliem did say that his site’s customers were “a different player segment” than his land-based customers, so the closure of land-based operations has provided a boost “but not to an above-average extent.” At the end of the day, Bliem’s glad to have some part of his operation still functioning, but online revenue simply “cannot replace” the land-based business.

Earlier this month, online gambling technology provider NetEnt announced its entry into Switzerland’s regulated market via deals with both Grand Casino Baden and Grand Casino Luzern. NetEnt said it expects to launch products with several other Swiss-licensed operators in the coming months.