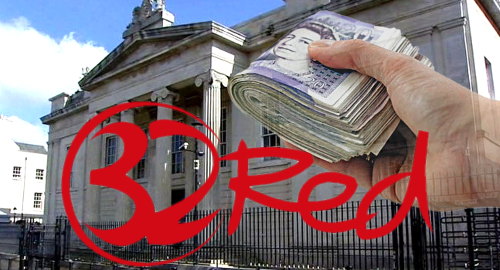 The Kindred Group’s online casino brand 32Red has reimbursed a Northern Ireland business nearly £590k that one of the firm’s employees embezzled and then gambled away on the site.

On Tuesday, Londonderry Crown Court was informed that 32Red had paid nearly £590k to the owners of S3 Alliance, an industrial equipment supplier based in Derry, Northern Ireland. The funds had been embezzled by an S3 staffer via company debit and credit cards, after which the money was spent wagering on 32Red’s UK-facing site.

In October, 44-year-old Tracey Curran pleaded guilty to six counts of fraud by false representation for using S3’s Bank of Ireland and American Express cards to withdraw over £590k from company accounts between January 2016 and April 2017. The Court was told that “the money has all been lost” to 32Red during that period.

This week, a Public Prosecution Service barrister informed the Court that the “vast amount” of the money stolen by Curran “has been reimbursed as a gratuity” by 32Red. Defence lawyers said they’d engaged accountants to verify that the full amount of the purloined gambling funds had in fact been reimbursed to S3.

This is the latest instance of negative publicity attached to 32Red, having been hit with a £2m penalty by the UK Gambling Commission (UKGC) in June 2018 for shortcomings in its social responsibility and anti-money laundering protocols, which led to a VIP customer losing £709k to the site over a three-year period.

More recently, 32Red was spanked by the UK’s advertising watchdog for running paid-for Google search ads promoting a Jack and the Beanstalk slots title that the regulator felt would unnecessarily expose kids to the existence of gambling.

This August, 32Red was slammed for its decision to sponsor Championship football squad Derby County, which included a #32 jersey for the club’s new signing Wayne Rooney. Critics felt the linkage between sport and gambling was way too on the nose, and 32Red quickly announced that it would feature responsible gambling messaging on the jerseys of all five UK football clubs it sponsored.