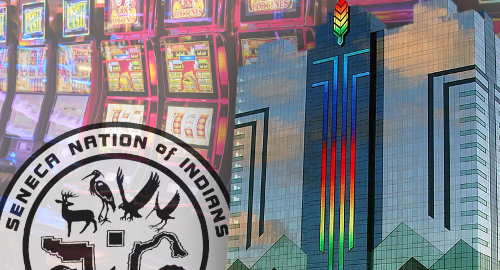 The Seneca Nation of Indians has lost another legal skirmish over sharing casino gaming revenue with the state of New York.

Last Friday, the US District Court for the Western District of New York ruled that the Senecas are indeed on the hook for several hundred million dollars in revenue-sharing payments they’d withheld from the state based on the tribe’s reading of the wording of their gaming compact.

In April 2017, the Senecas began withholding the 25% share of slots revenue from their three upstate casinos they were required to remit to the state. The tribe argued that their compact didn’t require them to continue making the payments, which averaged around $110m per year, following the conclusion of the compact’s initial 14-year term.

Earlier this year, an arbitration panel voted 2-1 in favor of the state that the compact’s terms also applied to its automatic seven-year extension given that neither party had objected to it taking effect. The panel estimated that the total sum withheld from the state had reached at least $255m by that point.

The Senecas had previously signalled that they would abide by the arbitration panel’s decision but in April they asked the federal courts to have a look. Friday’s ruling by Judge William Skretny upholds the panel’s decision and rejected the Senecas’ request to have the US Department of the Interior review the matter.

Following Skretny’s ruling, Seneca president Ricky Armstrong Sr. issued a statement saying the tribe “understood the reality that the arbitration and court proceedings may not ultimately uphold the language of the compact as written.” Armstrong said the tribe was still considering whether to appeal Friday’s ruling.

A spokesman for New York Gov. Andrew Cuomo issued a somewhat sore-winner statement reminding the public that the host communities in which the tribe’s casinos are located have been struggling to fund necessary programs without their share of the slots revenue. The statement concluded with the hope that the Senecas “end this charade, stop using the courts to delay, and pay what they owe.”

The Senecas’ decision to withhold the payments was widely perceived as retaliation for the state’s 2015 decision to authorize new commercial casinos, including the del Lago Resort & Casino in Seneca country, just outside what the gaming compact calls the tribe’s ‘exclusive’ territory. It’s easy to surmise that the tribe hasn’t been displeased with the commercial casinos’ poor showing to date, which has the state mulling a financial bailout.

Earlier this month, the Seneca casinos signed a sports betting technology deal with European operator Kambi Group. The partnership will focus on land-based betting to start, as the state has yet to authorize online wagering. That is, assuming the Senecas don’t choose to test the state on the tribe’s right to chart its own path.