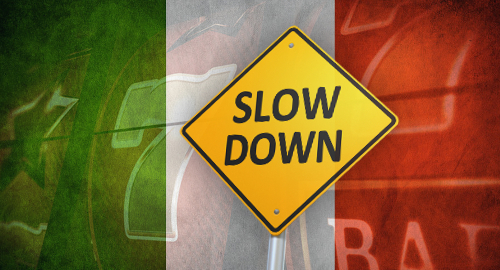 Italy’s online casino market growth slowed to a trickle in October as the government mulled the possibility of taxing punters’ winnings.

However, October’s online casino tally was well below September’s €71.8m, and the pace of annual growth slowed dramatically. The online casino vertical had grown accustomed to double-digit growth, including a 22.4% year-on-year rise in September. In fact, October’s growth rate was the only single-digit score the market has reported this year.

Regardless, The Stars Group’s PokerStars brand retained its online casino crown, claiming 10.6% of October’s diminished revenue pie, with Sisal not far back at just under 9%, while Playtech’s Snaitech brand (8.3%) edged out Lottomatica (8.2%) for third place.

It’s unclear how much of October’s gambling decline is due to the government’s restrictions on gambling advertising, although local broadcasters are certainly feeling the pain. The same can’t be said for the government, which reported revenue from gambling of €11.53b in the first nine months of 2019, up 7.6% from the same period last year.

The government’s gambling revenue will rise even higher thanks to recent budget changes, which are projected to boost the annual take by around €700m next year and by another €600m in 2021. Most of the increase will come from increased gaming machine taxes but, despite reports to the contrary, the government has confirmed plans for a new tax on gambling winnings.

Starting in May 2020, the government will impose a 1.9% tax on video lottery terminal winnings under €500, which previously were immune from taxation. In a rare display of clemency, this rate will decline to 1.3% in January 2021. However, 2021 will also see the current 12% rate applied to gambling winnings over €500 increase to 15%. Keep this up, and Italy’s October slump may prove to be the norm.