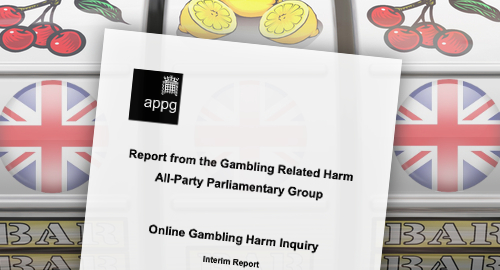 A UK parliamentary group is recommending sweeping curbs on the online casino sector, including a reduction in maximum slots stakes to £2 per spin.

On Monday, the All-Party Parliamentary Group (APPG) on Gambling Related Harm released an interim report on their Online Gambling Harm Inquiry, which calls on the government to “urgently introduce new gambling legislation with a focus on harm prevention.”

Chief among the APPG’s findings is that there is a “disparity in content controls and stake and deposit limits between online and offline games.” As such, the APPG sees “no justification for having slot machine style games online with staking levels above £2,” similar to the stake limits introduced this April on the fixed-odds betting terminals (FOBT) in bookmakers’ betting shops.

The APPG also calls for a ban on funding online play with credit cards, giving banks a greater role in determining customer affordability checks, restricting VIP accounts and inducements to gamblers, requiring operators to “commit to fund-blocking software” that would be provided free to self-excluded gamblers, and imposing a “smart statutory levy” of 1% of gambling revenue to fund harm-related research.

The APPG wants to see a more responsible approach to gambling marketing, including a total ban on gambling sponsorship of sports teams or leagues, plus an end to digital pitch-side promos. Broadcasters who “have been most resistant to the clampdown on advertising” also have “an important role to play.”

The report also wants UKGC online licensees to “cease active trading in jurisdictions that have not formally legalized remote gambling.” Licensees should also be required to “ensure they are protecting children and the vulnerable” in every market they do business and to fork over data as a condition of licensing to ensure “quality, independent research can be undertaken.”

SHOTS FIRED AT UKGC
The APPG takes an even bolder step by declaring that the UKGC’s failure to address online stakes and deposit limits makes the nation’s gambling regulator “unfit for purpose.”

APPG chair Carolyn Harris said the report demonstrated “the urgent need for a root and branch review of the regulation of online gambling.” Harris further slammed the UKGC for “an abdication of its responsibility as a regulator.”

Vice-chair Iain Duncan Smith said UK online operators had for too long “exploited vulnerable gamblers to little or no retribution from the regulator,” apparently unaware of the millions of pounds the UKGC has extracted from its online licensees in recent years for regulatory shortcomings.

The UKGC reacted by noting that the APPG hadn’t bothered to consult the regulator before releasing its report, adding that online stake limits are part of the UKGC’s current consultation on the use of credits cards for funding online play.

The APPG made reference to recent UKGC statistics indicating a rise in the number of youths who claim to have gambled online, although the APPG failed to note that the majority of these youths copped to having gambled using their parents’ accounts with their parents’ permission, so unless the APPG is advocating an Australian-style facial recognition requirement, there’s not much more that operators can do on this front.

The UKGC wasn’t alone in being singled out for attack by the APPG (which insists that its members are “not anti-gambling”), as GVC Holdings CEO Kenny Alexander was accused of “cowardly behavior” for withdrawing from an appearance before the APPG and failing to send a representative in his absence.

UNINTENDED CONSEQUENCES
It’s worth noting that the APPG’s methodology in previous gambling reports has been the subject of government criticism. Regardless, UK online licensees’ share prices took a beating following the report’s release, with GVC down 10.5%, William Hill falling 12.6%, while Flutter Entertainment was off a comparatively modest 3.4%.

It’s also worth noting that a recent report by PricewaterhouseCoopers (PwC) indicated that, while unauthorized online operators currently account for only around 1.2% of UK online betting turnover, “further regulations may lead to frictions in the customer experience … and drive gambling further into the black market.”

While PwC acknowledged that many of these frictions “are very good ones and are there for good reason … the relationship between their existence and potentially unintended consequences is something that needs to be carefully considered.”

The UK taxman released statistics last week that showed UK online casino operators paid 26% more tax in the six months ending September 30 than they did before the government hiked the Remote Gaming Duty by five points to 21% in April.