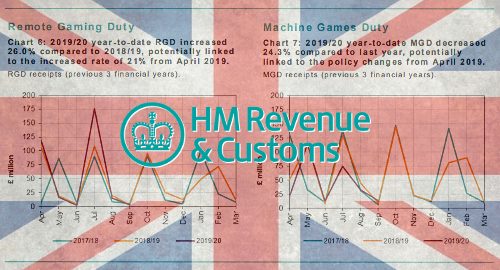 UK gambling operators may be struggling, but the government continues to make out like the tax-hoovering bandits they are.

On Thursday, HM Revenue and Customs (HMRC) released its latest UK Betting and Gaming Statistics report, which revealed that the government’s gambling tax take in the six months ending September 30 hit £1.463b, up a modest 0.5% from the same period last year.

While the total haul is virtually unchanged, the individual gaming segments’ contributions to that total have shifted dramatically since April 1, when the UK government boosted the Remote Gaming Duty (RGD, aka online casino revenue tax) from 15% to 21%.

The government boosted the RGD to compensate for its forced reduction in maximum stakes on the fixed-odds betting terminals (FOBT) in UK betting operators retail shops, a change that also occurred on April 1. HMRC’s latest report shows £270.3m derived from Machine Gaming Duty (MGD), down 24.2% year-on-year.

So HMRC’s online casino tax take in its fiscal H1 rose by £68.5m while FOBT tax fell by £86.7m. However, when looking at the three months ending September 30 – which featured a busier sports calendar and thus more opportunity for online cross-sell to casino – RGD was up 47.4% (a gain of £63.4m) while MGD fell by one-third (a reduction of £61.1m).

The General Betting Duty on both land-based and online fixed-odds wagering added £274.3m in the six months ending September 30, down roughly 11% year-on-year, although the 2018 period did feature a little quadrennial shindig known as the FIFA World Cup.

Lottery Duty continued to bring in the bulk of HMRC’s gambling tax take at £471.7m, up nearly 16% year-on-year. The lottery numbers were goosed by a record haul of £90.7m in September, which HMRC attributed to a larger than normal rollover prize on offer.