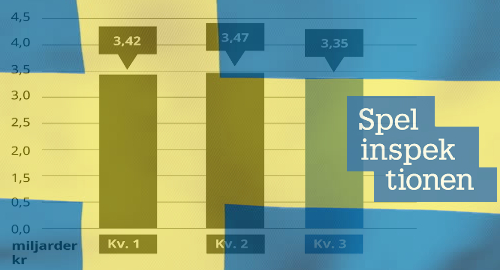 Sweden’s regulated online gambling market took a step backward in the third quarter of 2019, posting its lowest revenue total of the year to date.

On Monday, Sweden’s Spelinspektionen regulatory body released a preview of its Q3 market performance, and the numbers were anything but positive. Total revenue for Swedish-licensed online gambling operators was SEK3.35b (US$344.8m), down SEK120m from Q2’s total and SEK70m below Q1.

Total online revenue for the first nine months of 2019 stands at SEK10.24b, slightly below the SEK10.87b that Spelinspektionen reported was generated over the same period in 2018 by the state-owned Svenska Spel, the AB Trav and Galopp (ATG) horseracing monopoly and the internationally licensed online operators who until this January were prohibited from operating legally in Sweden.

Full figures for Q3 aren’t available yet, but Spelinspektionen previously claimed to have ‘channeled’ 91% of Sweden’s online gamblers to locally licensed operators through the first half of 2019. The regulator is reportedly planning to boost that percentage by stepping up payment blocking of the remaining international rogues.

Not all Swedish-licensed operators are so grim, as ATG’s report card for Q3 showed the company’s revenue rising 12% to SEK1.17b. While its core horseracing product showed a 2% fall in betting turnover, ATG’s new online sports betting and casino products – which it didn’t have until this January – brought in SEK154m, more than offsetting the SEK24m decline in racing revenue.

ATG hasn’t given up on its racing product, having recently announced plans to merge liquidity for different type of wagers – win, place, doubles, triples, combinations – into a single pool starting in December. Nasdaq, with which ATG signed a deal in January, will use its Longitude technology to calculate odds for each bet combination. ATG believes the common pool will allow the introduction of other betting products to ensure race bettors don’t get bored.