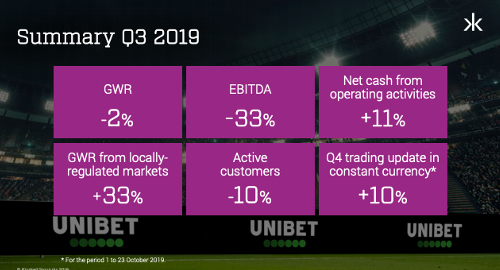 Online gambling operator Kindred Group continues to struggle under the weight of Swedish regulations and taxes.

On Friday, Kindred issued its financial report for the three months ending September 30, during which revenue dipped a modest 2% to £226m but earnings fell by one-third to £37.2m and after-tax profits plunged 51% to £18.1m.

Kindred CEO Henrik Tjärnström jumped right into the blame game, citing Sweden’s regulated online market as the cause of the company’s “difficult market conditions” that are making it “challenging to attract customers into the system.” Tjärnström said these conditions led to a £12.8m year-on-year decline in Swedish-derived earnings.

Kindred’s results were also negatively impacted by “headwinds in the Netherlands” thanks to the loss of the local iDEAL payment processing service. In August, Kindred’s Unibet brand was penalized €470k by the Dutch gambling regulator for serving local punters without local permission.

Active customer ranks dipped 9.5% in Q3, the second straight quarter of declining activity. Active customer numbers are now just slightly above their Q1 2018 level, but Kindred says actives are up 2% year-on-year in Q4 trading to date, while daily average revenue is up 9%.

Kindred derived 57% of its Q3 revenue from ‘locally licensed’ markets, and while the company says this is part of its focus on ‘sustainable’ revenue, locally licensed also means locally taxed. This ‘short term margin pressure,’ as Kindred puts it, saw betting duties rise 26% year-on-year, accounting for 21.3% of total revenue.

Speaking of, Q3 saw Kindred launch its Unibet brand in both New Jersey and Pennsylvania, although the latter state’s online operations won’t get underway until November. Again, Kindred expects great things from these operations in the long-term, but startup costs resulted in a Q3 earnings loss of around £1.8m (on top of £1.6m in Q2).

Kindred investors apparently read a different report than the rest of us, as the company’s shares closed out Friday’s trading on the Stockholm exchange up nearly 16% to SEK70.24, although that’s still well below its 2019 peak of SEK102.15.