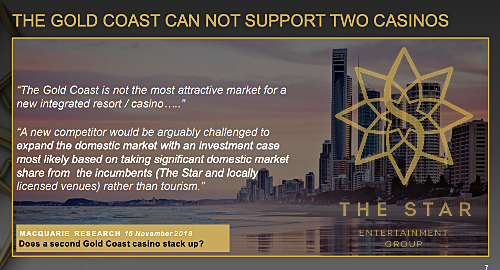 On Thursday, The Star held its annual general meeting in Brisbane, the first time the company has chosen to host its AGM outside of Sydney. The choice of venue was no accident, due to a pitch chairman John O’Neill wanted to make to the state of Queensland’s government.

The Star operates two Queensland casinos; one in Brisbane, the other on the Gold Coast. A year ago, The Star received permission to dramatically expand its Gold Coast property but the company has expressed unease with the state’s efforts to lure another casino company to the Gold Coast.

On Thursday, O’Neill reiterated The Star’s position that “the Gold Coast market is too small for two casinos” and the addition of a local rival “would force us to defend our local market share at the expense of driving incremental interstate and international tourism.”

In exchange for retaining its Gold Coast monopoly, O’Neill said The Star would construct five additional hotel towers alongside its existing two hotels, invest up to AU$100m (US$68.2m) to expand the Gold Coast Convention and Exhibition Centre (GCCEC), while “refreshing” the Sheraton Grand Mirage beachfront resort.

O’Neill said the billions the company is prepared to invest in Gold Coast – not to mention its Queen’s Wharf integrated resort plans in Brisbane with joint venture partners Chow Tai Fook Enterprises and Far East Consortium – would result in higher gaming tax revenue for the state. The company is proposing that a portion of this revenue be reserved to “secure, promote and market new events, conventions and shows” at the GCCEC to further boost tourism.

The Star also offered an update on the company’s performance since the start of its current fiscal year on July 1. The company said its domestic revenue was 1.5% higher year-on-year and its VIP gambling revenue was also up, at least, on a ‘normalized’ basis (which assumes a constant 1.35% VIP win rate).

The actual VIP win rate is below the theoretical range, which was “negatively impacting statutory results.” And while the company said VIP ‘business volume’ was up year-on-year, it also said the front money put up by VIPs was flat.

In August, The Star reported that its VIP turnover had fallen by nearly one-third in the 2019 fiscal year. But the company managed a one-third profit rise thanks to an improved VIP win rate, a strong showing by its domestic gaming business and some ruthless payroll cuts.