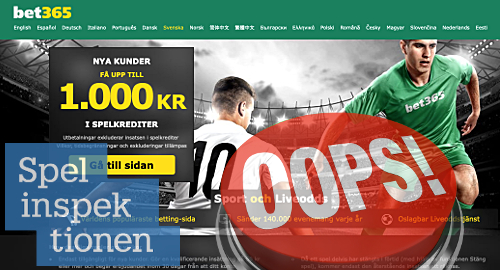 Sweden’s gambling regulator has decided not to punish four of its licensees after concluding that they hadn’t violated rules on accepting wagers on matches involving underage athletes.

On Thursday, the Spelinspektionen regulatory agency announced that it had wrapped up its probe into whether four locally licensed gambling operators – Betsson, Bet365, local racing monopoly AB Trav Och Galopp (ATG) and the Kindred Group’s Spooniker subsidiary – had violated their license terms by accepting wagers on contests involving athletes under the age of 18.

In late April, Spelinspektionen issued a warning that some of its licensees had offered in-play bets on the performance of individual athletes, some of whom were under 18 at the time. In July, Spelinspektionen lowered the boom on eight licensees, including Bet365’s Hillside Sports offshoot, which was ordered to pay a penalty of SEK10m (US$1.1m).

But Spelinspektionen now says a closer inspection of the events in question showed that the players involved “were largely over 18 years.” As such, it was dropping its investigation of the four operators cited above.

It’s unclear from the announcement whether Spelinspektionen is conducting reviews of similiar instances involving other licensees. In addition to the eight operators warned and/or spanked in July, the regulator spanked a further four in August. The confusion over what is and isn’t permissible convinced Gaming Innovation Group to shut its Swedish-licensed sportsbook in July.

This week, Swedish government representatives held a meeting with local football and hockey associations to discuss whether to prohibit certain types of in-play betting, specifically, those that depend on the actions of an individual athlete. The theory is that eliminating such markets will reduce the likelihood of match- and spot-fixing.

Patrik Hofbauer, CEO of the state-run Svenska Spel gambling business, immediately offered his group’s support for this proposed restriction, saying it should be the goal of all gambling operators to “work together against cheating and crime.”

SWEDISH MEDIA WIN APPEAL OF GAMBLING AD FINES
Meanwhile, Swedish media scored a legal victory this week after an appeals court ruled that they didn’t have to pay fines for running ads for unauthorized gambling operators.

The fines, which were issued in May 2018 by Spelinspektionen (under its previous Lotteriinspektionen identity), followed warnings sent to 39 online media outlets to stop running ads for internationally licensed gambling sites within 24 hours or face the consequences.

This week, the Court of Appeal in Jönköping ruled that the SEK100k fines that the gambling regulator imposed on the offending media outlets had lost their relevance following the January 1, 2019 launch of Sweden’s new regulated online gambling market. As such, the media outlets are off the hook.

Interestingly, one of the international gambling operators mentioned in the regulator’s warnings was none other than Global Gaming Ltd’s Ninja Casino, which is involved in a separate court case that got underway this week regarding what level of advertising is permissible under Sweden’s regulated market.