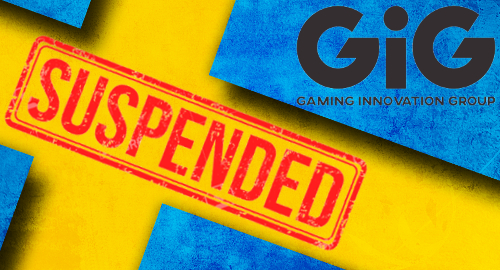 Gaming Innovation Group (GiG) has shut down its Swedish-licensed online sportsbook due to what it calls “the lack of clarity in the Swedish gambling regulation.”

On Tuesday, GiG issued a statement saying it had “proactively chosen to temporarily suspend its sportsbook on inhouse brands Rizk and Guts in Sweden pending clarification from [Sweden’s Spelinspektionen regulatory body] with respect to the interpretation of some elements of the Swedish gambling regulation.”

GiG CEO Robin Reed said Sweden’s existing online sports betting rules “are too open to interpretation, leaving uncertainty around whether an operator is in fact compliant or not.” Reed said it was “critically important for us to be compliant” and the shutdown was necessary to “protect the company and its shareholders from potential penalties from such vagueries [sic].”

GiG says the sportsbook suspension is only temporary and limited to Sweden, and will have an “immaterial” impact on GiG’s finances. All pending wagers placed by Swedish punters will be honored.

Sweden’s strict approach to wagering on underage athletes has come under increased scrutiny via the recent surge in interest in 15-year-old tennis phenom Cori Gauff, whose Cinderella-like run at Wimbledon ran out of steam on Monday. Operators were left unsure how to handle their Wimbledon markets without landing outside Spelinspektionen’s red lines.

Meanwhile, Global Gaming (GG) has lost another legal challenge of the cancellation of its Ninja Casino brand’s Swedish license. On Tuesday, the Administrative Court of Appeal rejected GG subsidiary SafeEnt’s appeal of a recent ruling denying Ninja Casino’s right to operate in Sweden while GG appeals Spelinspektionen’s June 17 decision to revoke SafeEnt’s license due to “serious shortcomings” in the site’s responsible gambling and anti-money laundering efforts.

Sweden’s regulated gambling market, which launched in January, has so far issued 67 licenses to different gaming companies. As of last week, 18 of these licensees have been hit with warnings and/or penalties, including fines totaling SEK98.2m.

More penalties are likely if Sweden’s licensees fail to submit timely information to Spelinspektionen regarding their responsible gambling protocols. The regulator has given all licensees until July 20 to submit this data, with the obvious threat of more penalties, including possible license revocation, if this deadline isn’t met.