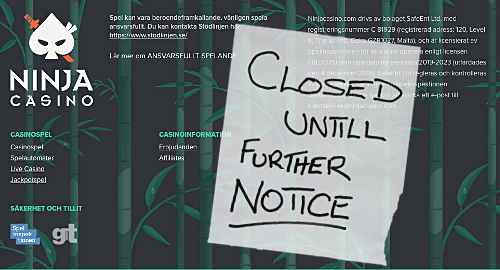 Ninja Casino’s parent company has lost its bid to continue operating in Sweden while it appeals the revocation of its online gambling license.

Global Gaming has appealed the revocation but hoped to continue offering online casino and sports betting services in Sweden while its appeal was pending. The Swedish market’s importance to Global Gaming’s overall business was made clear in April, when the company announced that adjusting to the country’s newly regulated online market had resulted in an 18% revenue decline in the first quarter of 2019.

The court recognized that the suspension of SafeEnt’s license was “a very invasive decision” for the company but noted that gambling can only be conducted in Sweden “if there is acceptable protection for excessive gambling” and proper AML measures are in place. The court’s read of the situation is that “it cannot be said to any great extent that SafeEnt Ltd’s appeal will be approved” and thus the license revocation should stand.

Global Gaming’s acting CEO Tobias Fagerlund said the company was “of course disappointed” by the ruling, which the company will now take to the Administrative Court of Appeal. Fagerlund restated the company’s opinion that Spelinspektionen’s original decision to revoke SafeEnt’s license and then to prohibit it from operating during the appeal was “incorrect.”

Fagerlund added that his company, its 170 employees and roughly 6k shareholders “are suffering every minute business cannot be conducted” and it’s only fair to permit them to continue operating during the appeal process “to limit the continuing damage to us.”