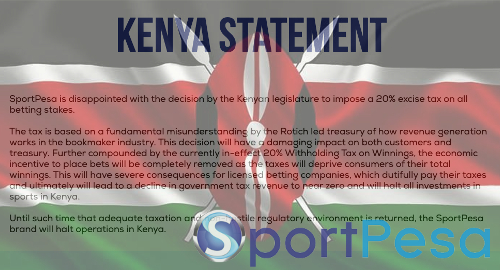 Kenya’s leading sports betting operators SportPesa and Betin have both shut their local operations in protest of the government’s new 20% tax on betting stakes.

This weekend, Kenyan media reported that the two companies, which collectively controlled over three-fifths of the local betting market, were shutting their Kenyan operations until the government changes its tune on the new betting turnover tax, which the companies claim has made their local businesses unviable.

SportPesa and Betin were among the 27 betting firms whose gaming licenses were suspended in July due to what the Kenya Revenue Authority (KRA) claimed were hundreds of millions of dollars in unpaid taxes. The companies also had their digital payment processing channels shut down, effectively leaving them unable to conduct business.

SportPesa, which claimed earlier this month that it was preparing to relaunch its operations after reaching a deal with the KRA, subsequently learned that the Betting Control and Licensing Board (BCLB) wanted it to reapply for a gaming license. The gambling regulator didn’t present that same hurdle to SportPesa rival Betway, whose license was reinstated in August after the company agreed to impose the 20% tax.

The dispute centers on the definition of the 20% tax on punters’ winnings, with the operators insisting that it should apply only to the actual winnings, while the KRA maintains that the tax applied to all money returned to bettors, including their original stake.

SportPesa issued a statement this weekend saying the government was making “a fundamental misunderstanding … of how revenue generation works in the bookmaker industry.” SportPesa added that the turnover tax “will have a damaging impact on both customers and treasury” and that its local operations won’t restart “until such time that adequate taxation and non-hostile regulatory environment is returned.”

Betin informed all its Kenyan staff that they would be made redundant as of October 31, explaining that “as a result of the deterioration of the profitability, the management has had to rethink its operational model and to proceed with the exercise of termination on account of redundancy.”

The twin shutdowns will result in over 2,500 Kenyans losing their jobs but the KRA appears unrepentant, stating that it wants criminal charges laid against Betin’s directors over their alleged “unwillingness” to settle their outstanding tax bill of Ksh3b (US$28.9m). The KRA has previously stated that SportPesa’s arrears total an astounding Ksh23b.

KRA commissioner-general Githii Mburu claimed that his hands were tied regarding the restoration of the firms’ suspended licenses, saying the matter was entirely up to the BCLB. “If [the BCLB] decide to wait until [the operators] finish paying the taxes to restore their licenses, that’s up to them.”