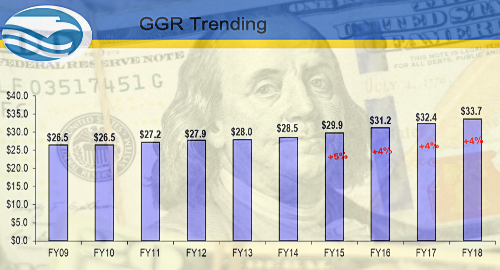 Last week, the National Indian Gaming Commission (NIGC) released its annual report on tribal casino revenue for fiscal 2018, during which some 501 tribal venues operated by 241 federally recognized tribes across 29 states reported gaming revenue of $33.72b, a 4.1% rise over the $32.4b that 494 venues reported in fiscal 2017.

The 4.1% year-on-year growth matches the rate reported in 2016 and 2017, while 2015 enjoyed a slightly better 5% rate. But unlike previous years, all of the NIGC’s eight geographic regions reported positive growth, led by the Portland region (Alaska, Idaho, Oregon and Washington), which rose 8.2% to $3.66b thanks in part to three additional submissions since the 2017 report.

Sacramento (California, Northern Nevada) remains the biggest tribal region in financial terms, with its 73 operations reporting revenue of nearly $9.28b (+3.1%). In second place was the 38 properties in the Washington, DC region (Alabama, Connecticut, Florida, Louisiana, Mississippi, North Carolina and New York), which ranked second with $7.52b (+2.6%). Third place went to the 95 properties in St. Paul (Indiana, Iowa, Michigan, Minnesota, Nebraska and Wisconsin), which rose 4.6% to $4.8b.

The NIGC’s impressive results dovetail with the tribes’ US commercial counterparts, whose 465 casinos reported record revenue of $41.7b in 2018, a 3.5% rise over 2017’s result.