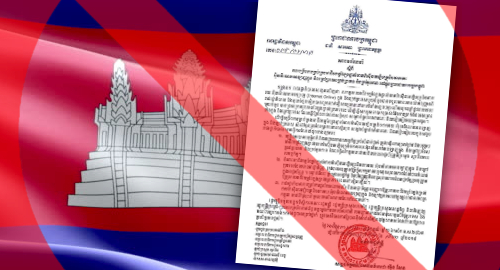 On Sunday, Cambodian Prime Minister Hun Sen issued a directive announcing that the government “will stop the issuance of online gambling policy and licenses, both within and outside the Kingdom of Cambodia,” effective immediately. Existing online licenses will remain valid but won’t be renewed once they expire.

The government justified the move by claiming that “foreign criminals have taken refuge in the form of this gambling to cheat and extort money from victims, domestic and abroad, which affect the security, public order and social order.” The directive added that all levels of government, including the police, “must take strict measures to implement this directive effectively.”

The Khmer Times quoted National Police spokesperson Lt. General Chhay Kim Khoeun saying the authorities “have already been cracking down on illegal gambling operations and … have arrested hundreds of people.”

Cambodia has become a primary hub for Asia-Pacific online gambling operators, thanks in part to the government going on a casino license-issuing binge. There were 163 active Cambodian casino licenses as of April 30, and many of these licensees’ primary motivation was to launch a China-facing gambling site.

With the exception of local operator NagaCorp, Cambodia’s gaming industry is largely driven by Chinese interests, particularly in the Sihanoukville region. China has become increasingly vocal about sites based in other countries catering to gamblers on the Chinese mainland, including the undiplomatic attack the Chinese embassy in the Philippines recently delivered against that country’s online gambling sector.

The leaders of China and the Philippines are scheduled to meet in Beijing this month, and Philippine government reps have suggested that online gambling will be among the topics up for discussion. It remains to be seen whether Cambodia’s new anti-online stance will become part of a pattern in which Asia-Pacific governments play a more active role in combatting China-facing gambling operations in order to stay in Beijing’s good books.