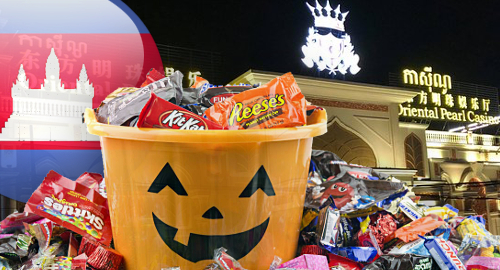 Cambodia’s government continues to hand out new casino licenses like they were Halloween candy, while slow-rolling the country’s long-awaited gambling legislation.

Cambodia issued a whopping 52 new casino licenses (one per week!) in 2018, bringing the total number of active gaming licensees to 150. On Tuesday, the Khmer Times quoted government representative Ros Phearun saying there’d been 13 new licenses issued in the first four months of 2019, boosting the number of active licensees to 163.

Phearun, the deputy director-general of the financial industry department at the Ministry of Finance, noted that there were actually only 51 casinos currently plying their trade in the country. Some of the other licensees are still in the process of building their venues, while others have halted their operations for one reason or another. And in truth, most of these licenses are actually issued for online gambling, not land-based gaming.

While Cambodia’s casinos were once concentrated in border towns such as Poipet and Bavet, Phearun revealed that 91 of the 163 licenses were for operations based in Preah Sihanouk province, which has witnessed massive development in recent years following an influx of Chinese businessmen, ex-pat Chinese workers and the occasional gangster.

It’s hard for the government to resist the urge to keep awarding casino licenses given that Phearun suggested the tax take from gambling is expected to top $70m in 2019, a significant bump from 2018’s $46m.

However, while Phearun insisted that a draft of the gaming law was ready to be submitted to the Council of Minister ‘soon,’ the government has been promising that for most of this decade. Frankly, it’s even money that observant Jewish families are more likely to see Elijah show up at their Passover feast before Cambodia’s gambling law arrives.