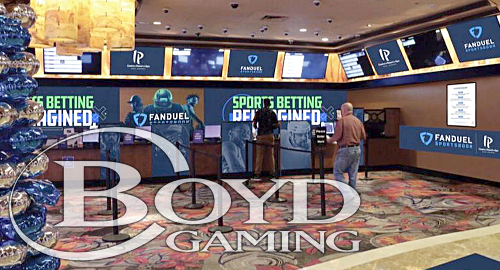 Regional casino operator Boyd Gaming says its new sports betting partnership with FanDuel could turn out to be gangbusters down the road, but for now, it’s all about driving foot-traffic.

Boyd’s numbers were goosed by the company’s 2018 acquisition spree, which saw it absorb four Ameristar- and Belterra-branded casinos as part of its Pinnacle deal with Penn National Gaming, as well as Pennsylvania’s Valley Forge Casino and the Illinois-based Lattner Entertainment video gaming terminal business. The add-ons added a combined $228.5m to Boyd’s Q1 revenue total.

Boyd’s mainstay Midwest & South segment, which contains the aforementioned acquisitions, saw its revenue jump by two-thirds to $560.7m, allowing it to surpass the previously dominant Las Vegas Locals segment, which was essentially flat at $221m. The Downtown Las Vegas segment was up 5.4% to $64.5m.

On the analyst call, Smith said the existing sportsbooks were drawing “new and younger customers” to Boyd’s casinos and while “the profit is nice,” the main appeal of betting at the moment is “the incremental traffic that it drives into the building that supports the casino” and boosts other gaming and non-gaming verticals.

Smith also offered some insight into the FanDuel partnership, saying Boyd did derive a “benefit if one of our existing customers goes online” to use FanDuel’s app. Smith said there was “a mechanism to track all of this” to ensure that Boyd doesn’t “lose wallet from the customer or lose the benefit of the customer.”

Smith also pointed out that Boyd “absolutely” stood to benefit from having “access to 8m FanDuel customers that we get to market to on a regular basis,” a perk that “could be” somewhat significant down the road.