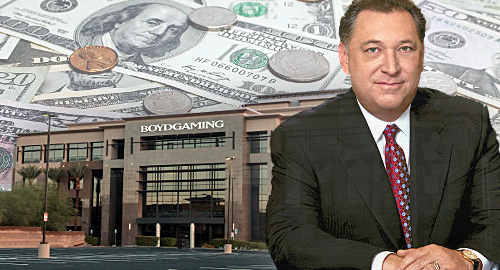 Casino operator Boyd Gaming enjoyed “significant progress” in executing its plan for world – or at least regional US market – domination in the second quarter of 2018.

Figures released Thursday show the Las Vegas-based Boyd generated revenue of $618.8m in the three months ending June 30, up 2.1% from the same period last year. Operating income was up 7.5% to $96.2m while net income dropped one-fifth to $38.9m.

It should be noted that Q2 2017 enjoyed a $21m bump from Boyd’s former 50% stake in Atlantic City’s market-leading Borgata casino, which the company sold to its Borgata partner MGM Resorts. Going purely on income from continuing operations, Boyd’s bottom line was up nearly 40%.

All three of Boyd’s business segments enjoyed mild revenue gains in Q2, including the Las Vegas Locals market, which saw revenue inch up to $220m but adjusted earnings rose 11% to $70.2m thanks to the highest Q2 operating margin since 2005. The Downtown Las Vegas segment reported revenue of $61.2m while earnings rose 8% to $13.5m.

Boyd’s mainstay Midwest & South segment reported revenue up 2.3% to $335.6m while earnings rose 5.1% to $93.7m. The segment includes one month’s worth of contributions from Lattner Entertainment, the Illinois-based video gaming terminal business that Boyd acquired in May. The addition helped the segment post its highest operating margins in 16 years.

Looking ahead, Boyd boosted its full-year 2018 adjusted earnings guidance by $15m to $633m. This includes the Lattner business but doesn’t include the four Pinnacle Entertainment properties or the Valley Forge Casino Resort in Pennsylvania that Boyd agreed to acquire late last year.

Boyd’s expansion into Pennsylvania has the company “closely evaluating” the potential of the state’s legal sports betting market. Boyd also operates two properties in Mississippi, which expects to launch its wagering market as early as next week. Boyd CEO Keith Smith (pictured) said the company was “actively preparing” for the launch of legal betting as opportunities arise in the states in which Boyd has a presence.