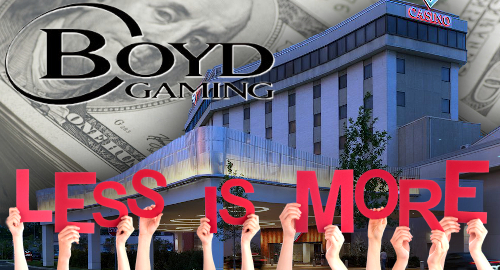 Boyd’s Q3 earnings margin was a record 36.6%, 10.5 points higher than the third quarter of 2019, as the company continued to selectively reopen its amenities following this spring/summer’s pandemic lockdown. As Boyd CEO Keith Smith noted in his Q2 analyst call, COVID-19 “carved a lot of costs out of the business” and the company has zero interest in bringing them back.

Of Boyd’s 29 properties, 18 reported double-digit earnings growth in Q3, while eight set all-time quarterly earnings records and three more set Q3 records. Boyd investors liked what they heard, as the stock closed Monday down nearly 2% — in line with the broader US casino sector’s performance – but regained all that ground in after-hours trading.

On a geographic basis, Boyd’s dominant Midwest & South segment revenue fell 15% to $463.6m while (pre-rent) earnings rose 16.8% to $182.5m, despite hurricane-related closures in Louisiana and Mississippi. The Las Vegas Locals segment reported revenue down one-fifth to $171.1m while earnings rose 23.1% to $78.9m.

The Downtown Las Vegas segment broke with this phenomenon, as revenue tumbled 71% to $17.5m while earnings swung from $11.9m in Q3 19 to a $1.5m loss. Boyd blamed the decline on the pandemic’s impact on Nevada-bound travel, particularly by tourists from Hawaii.

By the end of Q3, only three Boyd properties remained shuttered, all of them in Vegas: Eastside Cannery, Eldorado and Main Street Station.

Smith said Boyd’s rebound was in part due to more intense targeting of “upper tier customers.” Smith previously stated that Boyd casinos weren’t likely to bring back its buffets, which generally attracted a lower-tier clientele. The net result is that “average spend is up, but largely driven by just fewer lower end customers in the building.”

Boyd’s sports betting partnership with the FanDuel Group launched mobile betting in Illinois and Iowa during Q3, bringing Boyd’s number of active online betting states to five. Smith said “recurring EBITDA coming out of that [digital] business today is in the $8 million to $10 million range” as far as 2020 contributions are concerned, and that range doesn’t include the Illinois ops that launched in July.

Given the outsized valuations that analysts have bestowed upon US-facing betting operators, Smith was asked if Boyd had considered cashing in the 5% stake it took in FanDuel when the parties struck their deal in 2018. Smith acknowledged that this stake now represented a “tremendous amount of value” for Boyd and the company might consider cashing out “three to five years from now.” But for now, “the partnership is great.”

The quarter also saw the launch of Boyd’s B Connected Mobile app, named after the company’s customer rewards program. The app allows Boyd customers ‘frictionless’ access to Boyd’s complete digital offering, including betting via FanDuel and Boyd’s Nevada-based B Connected Sports app, as well as the new Stardust social casino.

The plan is to eventually create a single digital wallet within B Connected Mobile that will allow customers to easily shift between Boyd’s digital and land-based offering, be that gaming or non-gaming amenities.

Boyd took a step along this path this week by teaming with Aristocrat Technologies on a cashless wallet at Boyd’s Blue Chip casino in Indiana. Smith said Monday that the Blue Chip cashless experiment had already had “several hundred customers take advantage of it and that’s with no marketing.”