Home / Casino / Switzerland casino revenue up in 2018 despite online competition 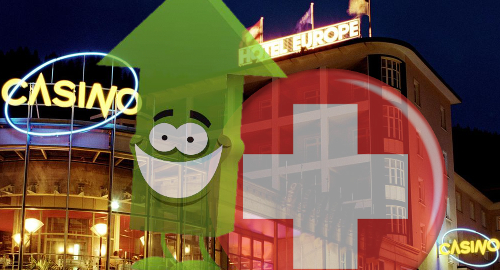 Switzerland’s land-based casino operators reported revenue gains in 2018, despite their repeated claims of being taken to the cleaners by internationally licensed online gambling operators.

The ESBK’s efforts to stamp out these casinos’ unauthorized rivals was also on the rise in 2018. The ESBK opened 98 new illegal gambling cases last year, of which 30 remained under review when the new year began. In total, the ESBK had 117 unresolved cases at the end of 2018.

The ESBK issued 255 case rulings last year, along with a total of CHF1.5m in financial penalties. The CHF also issued claims on CHF509k in illegal gambling profits, although staking these claims is always easier than actually collecting.

Both casino revenue and illegal gambling probes are expected to jump when the ESBK releases its 2019 report next summer. The Swiss regulated online gambling market officially got underway on July 1, although the ESBK has to date issued online permits to only four casino operators.

Most of the international online operators that have yet to find a required local casino partner have wound down their Swiss-facing operations until such partnerships can be struck. But Swiss punters will ultimately find ways of bypassing their government’s more dictatorial tendencies to gamble with sites of their own choosing.

While Swiss internet service providers (ISP) are now required by law to block the domains of unauthorized international operators—the first official blacklist is expected sometime in Q3—the new laws carry no punishment for individual gamblers who seek to evade these restrictions. As of last summer, virtual private network (VPN) usage had already begun to surge and will likely keep on growing as the government squeezes the ISPs ever tighter.

As for the non-casino sector, the Comlot lottery regulatory body, which also oversees race and sports betting, reported last month that total lottery revenue hit CHF943m in 2018, a modest 0.4% year-on-year gain. Lottery draw ticket revenue nudged up 2.8% to CHF362m and wagering rose 8.6% to CHF63m, but the mainstay lottery games segment dipped 2% to CHF517m.