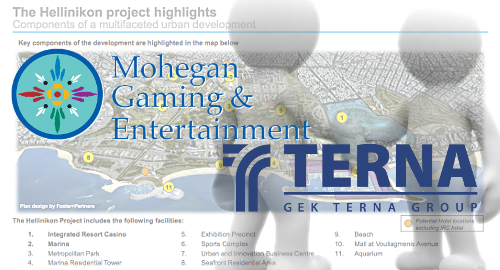 On Thursday, MGE announced that it was teaming up with Greek construction firm GEK Terna on a joint bid for the sole 30-year casino license at Hellinikon, which is being built on the site of Athens’ former international airport by a consortium led by local developer Lamda Development.

The MGE-Terna strategic partnership is the first to formally declare its intentions to bid on the Hellinikon license. Other casino operators, including Hard Rock International, Genting and Caesars Entertainment, have reportedly expressed interest in the casino project, although Caesars is said to have lost interest as its focus shifts to its imminent merger with U.S. rival Eldorado Resorts.

MGE CEO Mario Kontomerkos said GEK Terna’s “reliability, effectiveness and deep knowledge of the Greek market will help us fulfill our vision for the Hellinikon area.” GEK Terna Group CEO George Peristeris similarly hailed the chance to “cooperate with a leading international firm in the entertainment and gaming industry.”

The Greek government originally set an April 22 deadline for interested casino parties to submit their casino license bids but that date came and went, as have several others. The latest June 28 deadline was recently extended to July 31 after the government called a snap election for July 7.

Developer Lamda, which has financial backing for the project from Chinese and Arab interests, publicly complained last month about the government dragging its heels on issuing the three ministerial decisions—covering the casino, the metropolitan park and the environmental impact—that the project needs to proceed.

Lamda CEO Odysseas Athanasiou rejected government claims that his company was responsible for the delays, saying that the government had received all the necessary studies and documents by mid-February.