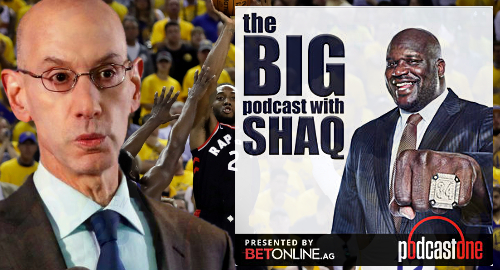 Since 2015, Shaq has produced an extremely popular podcast titled The BIG Podcast with Shaq, which is distributed by podcast network PodcastOne. One of the BIG show’s top sponsors is Antigua-based online sportsbook BetOnline, but that relationship is set to end now that the NBA has finally clued in to the deal.

Bookies.com reported Monday that NBA officials had become aware of the connection after ads appeared listing BetOnline as a ‘presenting sponsor’ of the BIG podcast. While the BIG show’s online promos continue to display BetOnline links, an NBA official confirmed that the league had conducted an investigation which revealed that Antigua (shock!) was not one of the 50 US states and thus BetOnline’s connection to BIG would have to end.

(For the record, the legality of Antigua-licensed online betting operators serving US customers has been upheld by multiple rulings at the World Trade Organization. The unwillingness of the US government to acknowledge these defeats doesn’t make them any less valid, particularly when the US has repeatedly applied its own domestic laws on an extraterritorial basis.)

The NBA’s ‘out, damned [gambling] spot’ reaction to BetOnline’s BIG sponsorship was compounded by the fact that Shaq is not only part owner of the league’s Sacramento Kings but also an NBA employee through his role as general manager of the Kings’ eSports franchise.

The NBA’s Adam Silver (pictured, scowling) has simultaneously been among the most forward looking of the major North American sports league commissioners in terms of embracing sports betting, while also proving among the most strident in demanding a share of betting proceeds, be it in the form of an ‘integrity fee’ or insisting on mandatory use of league-supplied data (for a fee).

Shaq has a long history of association with the gambling industry, having lent his name to everything from real-money slots to the social gaming version, along with basketball-themed virtual sports betting products.