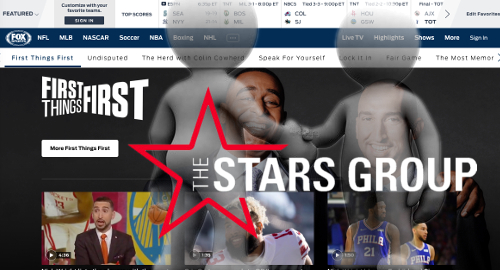 Online gambling operator The Stars Group (TSG) has struck a major sports betting partnership with broadcaster Fox Sports, which is taking a 5% stake in the gambling group.

On Wednesday, TSG and broadcaster FOX Sports, a subsidiary of Fox Corporation, announced the imminent arrival of FOX Bet, a “first of its kind national media and sports wagering partnership in the United States.”

The plan is to launch a real-money betting app dubbed FOX Bet in states where such activity is legal. A second product, which will be available nationwide, will be a free-play game that awards users cash prizes for correctly predicting the outcomes of games.

FOX was one of the early investors in DraftKings, back when the company was strictly a daily fantasy sports operator. Similar to that deal, this new pact requires TSG to make “a minimum annual advertising commitment on certain FOX media assets.” FOX will also receive certain brand license, integration and affiliate fees.

The pact will also see Fox Corp take a 4.99% stake in TSG through newly issued common shares worth around $236m, which TSG says it will use to pay down debt and other corporate bills. The deal also allows FOX Sports a 10-year window in which to acquire up to a 50% equity stake in TSG’s US-facing operations.

TSG CEO Rafi Ashkenazi claimed the pact “uniquely positions us to build a leading betting business in the U.S.” and he looked forward to working with Fox “to integrate wagering into sports media and drive customer acquisition and retention.”

FOX Sports CEO Eric Shanks said little about his group’s new partner, but did say the deal would expand “the way we immerse fans into the sports culture they love.”

The deal will put immense pressure on other US broadcasters to ink similar arrangements, and likely previews a major showdown with the federal government, which is currently trying to keep interstate online gambling under wraps.

TSG’s BetStars brand is already operational in New Jersey’s regulated betting market, and Ashkenazi had been teasing the markets for some time about his company’s preferred strategy of pursuing deals with unidentified (at the time) media partners, similar to the broadcast synergy TSG enjoys in the UK after acquiring Sky Betting & Gaming in 2018.

TSG has also been burnishing its US market presence through deals with casino operator Eldorado Resorts, as well as a gaming partnership with the National Basketball Association.

TSG has set an investor call for early Thursday morning at which the company will offer more details on the ramifications of the FOX tie-up. In the meantime, the news has sent TSG’s Nasdaq-listed shares up more than one-fifth in after-hours trading.